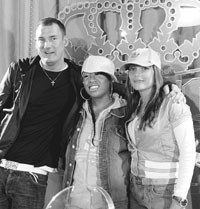 Flanked by Adidas’ worldwide creative director Michael Michalsky and Hot 97 radio station DJ Angie Martinez at the Adidas Originals store here, the hip-hop songstress said people have often told her she should have a deal with the company since she constantly wears the brand.

“I feel really honored and excited to be doing this,” said Elliott, who was dressed head-to-toe in Adidas, apart from a pink Dodgers baseball hat. “I have been a fan of Adidas since Run-DMC.”

Michalsky said his company has long taken note of how Elliott wears Adidas products and makes them her own by adding embellishments and customizing tracksuits and other items. “She has chosen to wear Adidas for years before we started this deal, and we always liked what she did with our products,” he added.

Adidas has an ambitious agenda for Respect M.E. (Missy’s initials, of course), which has three separate divisions and is projected to be a multimillion-dollar line within its first season, Joe Flannery, global director of Adidas’ Sport Heritage, told WWD after the press conference.

The initial offerings include items such as sneakers, T-shirts, track jackets and pants, hooded sweatshirts and accessories, as well as a selection of high-end leather jackets and even some boots. Although the line is primarily made for women, some items are designed to be unisex, said Michalsky, who also noted that some limited-edition items will be sold only for charity. The styling includes camouflage prints in bright colors, as well as cropped jackets and tank tops and retro-looking sneakers with Velcro straps. The bulk of the collection will retail for between $70 and $120, but will go as high as $700.

Elliott, who has lost about 75 pounds in recent months, told the packed house that sizes for the line will go from XS up to XXL to accommodate larger-size women.

Michalsky said Elliot is “deeply involved” in the collection’s design direction and gave direct input on color ways and styling, as did her stylist, June Ambrose.

Michalsky declined to reveal details of the financial arrangements between Adidas and Elliott. However, he quipped: “She doesn’t have to take the bus anymore.”

The collection will launch in 500 stores in the U.S. in September and next year will roll out to another 500. It will target department stores as well as specialty chains and urban retailers. The brand will roll out internationally starting in November. A marketing campaign featuring print advertisements and point-of-sale materials is also planned.

Female artists have not collaborated much with athletic brands, apart from occasionally appearing in advertisements.