Miu Miu Comes Into Its Own 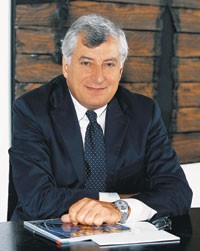 MILAN — Miu Miu is having her moment. And with her trademark spunkiness, she’s having it at a Parisian restaurant that served luminaries like Alexandre Dumas, Victor Hugo and Emile Zola and offered secluded spots for trysts with mistresses.

“After showing in London, New York and Milan, it is the right moment to show in Paris, the ideal location for a young brand that aims to strengthen its presence on the international scene,” Prada chief executive officer Patrizio Bertelli told WWD.

Bertelli is out to defy some industry-held notions of Miu Miu, which posted 2005 sales of 129 million euros, or $161.25 million, as just a diffusion line or secondary collection.

“Miu Miu is a brand with its own identity,” he said. “It has grown considerably in terms of content and quality. We want our clients and the industry to clearly understand this.”

Since the brand was launched in 1993, with a cowgirl-themed collection of fringed suede jackets and patchwork prairie skirts, Miu Miu has evolved into one of the most influential collections coming out of Milan, possibly because Miuccia Prada, or Miu Miu to her friends, takes such a raw, unfiltered approach to designing it.

“When I am working on Miu Miu [it] has to come immediately, instinctively, spontaneously with whatever is available at the moment. If I think three times, I stop,” Prada said.

The inspiration may be spontaneous, but the strategy guiding the brand’s development is anything but that. Miu Miu sales grew about 18 percent last year. The brand suffered in 2002 and 2003, mirroring declines in Prada’s revenue that were blamed on a cocktail of unfavorable exchange rates, shifting delivery times and overall macroeconomic difficulties. But sales rebounded in 2004 and zoomed in 2005.

With its network of 29 stores and 500 wholesale accounts and an especially strong presence in Asia, there’s plenty of untapped potential at the quirky brand, the group believes. Growing Miu Miu is a timely priority given Prada’s sale of Jil Sander to Change Capital last week. Although Jil Sander was losing money and biting into Prada’s margins, the German brand was the second-biggest revenue-generating label for the group. It posted 2004 sales of 136.8 million euros, or $169.6 million at average exchange rates.

“We are very pleased with Miu Miu’s progress in 2005 and have ambitious goals for the brand’s future,” Bertelli said. “We believe in its growth potential, and we are currently working on the collections, on the store image and on the communication necessary to achieve this growth.”

The ceo declined to release sales projections for the brand, or state whether Miu Miu could ever reach the same turnover as the Prada label, a billion-euro business. But he did say, “Where do we want to be? We are aiming high, according to our business plan.”

Giacomo Santucci, a partner specializing in luxury goods and retail at Value Partners and a former Prada manager, estimated Miu Miu could eventually post sales of 630 million euros, or about $750 million at current exchange. He described the move to show in Paris as a “brilliant” maneuver to catapult Miu Miu’s profile.

Yet Prada is hardly championing an aggressive retail rollout for Miu Miu — a costly misstep that has backfired for many a brand in the past. Instead, the company is distinguishing Miu Miu’s identity through steps such as setting up a separate showroom for the brand in an Art Nouveau villa that served as Prada’s first Milan headquarters, and using that same location for the men’s fall-winter show in January. Clearly Miu Miu’s decision to stage its women’s fall-winter show in a historic Paris eatery fits into this strategy to set Miu Miu apart. In customary fashion, Prada is keeping even the slightest hint about the show or the collection under wraps.

But speaking in general terms, Prada takes a more playful, less studied approach to Miu Miu than she does with the main collection.

“Anything avant-garde, twisted or challenging becomes part of my Miu Miu vision,” she said. “In this sense there is a bit more room for liberty.”

Prada and her husband, Bertelli, arguably took a liberty or two to cast a 50-something Kim Basinger and 19-year-old Camilla Belle in Miu Miu’s spring-summer ad campaign, shot in Paris in the former home of cabaret singer Mistinguett. Basinger, whose years outnumber those of previous Miu Miu faces Maggie Gyllenhaal, Drew Barrymore and Chloë Sevigny, indicates that Miu Miu is reaching out to a wider customer pool.

“The advertising campaign featuring Kim Basinger and Camilla Belle underlines that Miu Miu is a versatile brand. It’s also appropriate for a woman who is mature but sexy, who wants to feel young in any moment of the day. This has absolutely nothing to do with her age,” Bertelli said.

Barneys New York, which has carried Miu Miu since its first collection, has always done a “very strong business,” said Julie Gilhart, the store’s vice president and fashion director. “Miu Miu is based on great items. It’s a little less intense than Prada,” she said in terms of the craftsmanship and fabric elaboration involved in the signature collection.

Two Miu Miu stores are set to open this year — a flagship in Hong Kong and a boutique in Taipei, Taiwan — rounding out a retail network that currently consists of 25 directly owned stores and four franchises. On a retail level, Miu Miu is best represented in Asia, where it owns nine stores in Japan and another seven in other countries in the region. Western Europe is home to six stores, while the U.S. has only three, two in New York and one in Los Angeles.

Prada said that it’s expanding Miu Miu’s presence in both department stores and specialty retailers in the U.S. Bergdorf Goodman picked up the brand’s handbags and footwear this spring and the store is stocking Miu Miu’s ready-to-wear for fall.

Miu Miu did roughly half of its 2005 revenue, about 65 million euros, or $78 million, through its network of 25 fully owned stores. Japan accounted for 35 percent of the company’s retail business, while other Asian countries made up 20 percent. Europe generated 33 percent of retail sales and the U.S. made up the remaining 12 percent. Ready-to-wear generated 42 percent of Miu Miu’s retail turnover. Footwear comprised 26 percent and leather goods produced 32 percent of the total.

In line with Prada’s strategy to market Miu Miu as its own designer label and not a diffusion collection, the company has inflated price tags on the line but declined to quantify the increase.

“With regard to the positioning of Miu Miu, the prices are in line with the quality of the product,” Bertelli said. “It’s an interesting range for a young audience. We continue to witness strong customer loyalty to the brand. There is tangible evidence that when there is a high content of both design and quality, the price really isn’t the primary factor.”