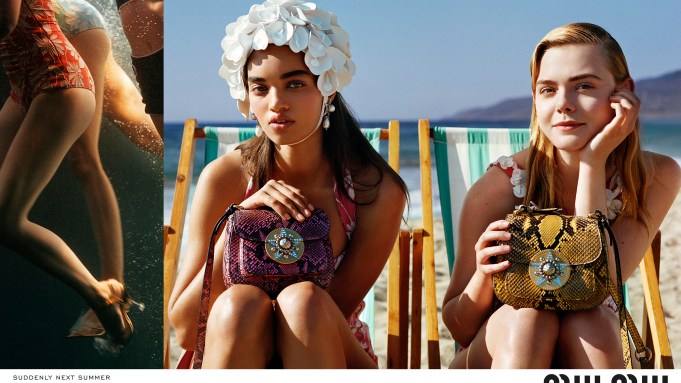 Miu Miu has reunited with Elle Fanning for its spring ads. Three years after their first collaboration, the “Maleficent” star features in the images alongside models including Karen Elson, Carolyn Murphy and Lara Stone.

It’s a fitting choice as the “Suddenly Next Summer” campaign, the third shot by British-born photographer Alasdair McLellan, has a strong cinematic flavor. Its Sixties-tinged images of models swimming and sunbathing on a beach reference classic summer movies such as “Il Sorpasso” and “Beach Blanket Bingo.”

This being Miu Miu, there is also a darker subtext to the images, with models alternately sporting sunny or pensive expressions. The brand said the campaign was an “interrogation of contemporary femininity and nebulous terms like actor, ‘It’ girl, model and celebrity.”

“The collages, composed as they are of multiple layers of thin images, reinstate the notion of the constructed identity: the creative role every woman takes on when imagining and organizing her public-facing life,” Miu Miu said.

WWD described the collection itself as “a bubbly retro romp,” highlighting its printed bikinis, candy-colored flip-flops and plastic bathing caps blooming with flowers.

Miu Miu has a long history of casting actresses in its campaigns. Its fall ads featured Amanda Seyfried, while Stacy Martin is the face of the brand’s signature scent. Fanning appeared alongside Elizabeth Olsen, Lupita Nyong’o and Bella Heathcote in her first Miu Miu campaign for spring 2014.

The American actress, who created a stir at the Cannes Film Festival for her role as an ingenue model in the gory fashion thriller “The Neon Demon,” has a slew of projects coming up. She is set to star opposite Nicole Kidman in John Cameron Mitchell’s “How to Talk to Girls at Parties” and will play “Frankenstein” author Mary Shelley in “A Storm in the Stars.”