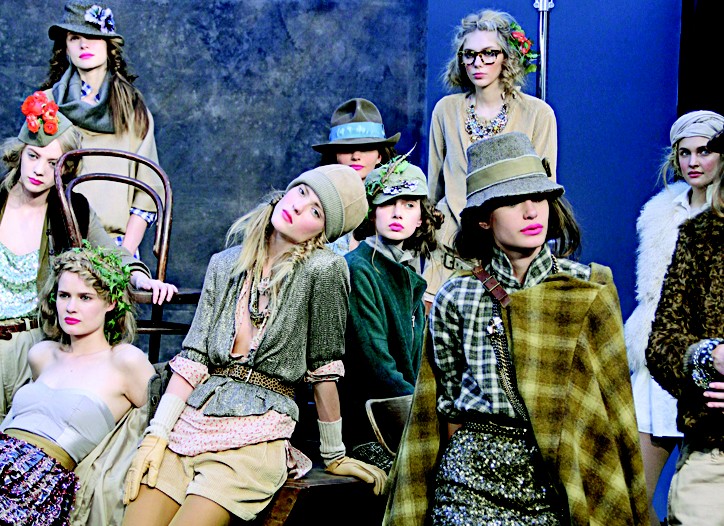 J. Crew continued to up its fashion ante with its first formal, out-of-house presentation Thursday in the penthouse of Milk Studios. Models styled in what’s become J. Crew’s signature playful mix were artfully arranged in a look that creative director Jenna Lyons described as “Edie Beale goes to Girl Scout camp.” Classic outerwear with a military feel was worn over girly sequined pieces, creating an eclectic layered look intended to further shed J. Crew’s preppy image, which makes Lyons cringe. “We had a story in The Guardian recently, and the opening line was ‘the preppy retailer,’ and I was like, really? Still?” Lyons sees the presentation as a way to distill the company’s vision, key to which is the catalogue as well as new collaborations, which for fall include hats by Albertus Swanepoel and a current project with Fenton/Fallon jewelry. “I love spiky jewelry, but if we did it, it wouldn’t make sense,” said Lyons of the collaborations. “It’s really about finding people who are doing interesting things and staying true to us.”

As for men’s wear, shown before the women’s presentation, J. Crew brought its American heritage to a new level with sophisticated and clean looks. Frank Muytjens, head of men’s design, said he took his cues this season from artists’ studios in Milan and Paris. “I’m inspired by their creativity and energy,” he said, noting particularly their seamless use of different textures and materials as well as saturated colors. This shone through in the key looks of the season, such as chinos with authentic vintage patches, and tweed and twill sportcoats. The collection was modernized by its dark-on-dark denim and fitted suits that evoked European designer lines but with a distinctly American sensibility. The fall collection also marked two new collaborations: Crescent Down Works for distinctive down jackets and Kelty for backpacks.