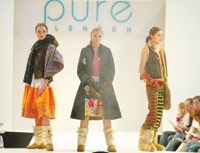 LONDON — For U.K. trade show organizers, variety is proving to be the spice of life.

They say the keys to future success include an increasingly varied mix of brands and exhibitors, and collaborations with European and U.S. fairs.

“It’s hard work for independent High Street retailers at the moment. There’s competition from supermarket brands, who are producing very well-priced, decent quality product. And the large High Street chains will go on sale at the drop of a hat,” said Carole Hunter, show director of Londonedge, an alternative fashion and streetwear fair, which will be held Sept. 4-6 at West London’s Olympia 2 Center.

Hunter said independents, which make up the majority of the fair’s visitors, rely on trade shows to source smaller brands and

As a result, trade show organizers are working to emphasize the sort of brand diversity that retailers want to see in their shops.

At the next TBC and FAO, to be held Aug. 6-7 at the new venue of East London’s Tobacco Dock, 30 brands will be introduced, taking the exhibitor numbers from 195 brands last season to 225.

At Pure, a middle- to high-end women’s wear and accessories show, which will be held Aug. 12-14 at Olympia in London, new brands made up 28 percent of the 800 brands offered at last February’s show.

At Margin, a directional streetwear show, 30 percent of the offerings at last February’s 60-brand show were new labels, including streetwear brands Bonnie and Clyde, Mertle & George and Kontak. Attendance, too, was up 35 percent season-on-season.

“Buyers always want to see something new,” said Louise Young, group exhibition director for Pure. “For department stores, it’s really important that the brands we have show originality. The likes of Zara and Mango are making high-fashion designs accessible now, so we need to keep up with that.”

At Londonedge, 38 percent of vistors were from overseas, with Germany, France and Italy representing the most attendees.

At TBC and FAO, McCann estimates that attendance was up 25 percent season-on-season, to around 8,000 visitors over the two-day show, largely from Europe. Most U.S. buyers, however, have stayed away from U.K. shows.

“The Americans tend to travel to either Paris or Milan for fashion weeks there,” said Kate Dixon, event coordinator for Eye2Eye, a high-end accessories show held Sept. 18-20, at the Truman Brewery on East London’s Brick Lane. “This definitely could be attributed to the weak dollar versus strong pound scenario, as other European cities are financially more viable, with more shows to visit.”

Dixon said Eye2Eye, whose 120 exhibitors included Marc Jacobs, Chloe and Viktor & Rolf last season, is hoping to collaborate with shows in the U.S. and Europe to raise the show’s profile outside the U.K.

Last season, Eye2Eye staged a one-off collaboration with Rendez Vous in Paris, which Dixon credits as helping the show “pick up a large amount of business from buyers that were unable to make it to the U.K., or who head only to Paris.”

Although last season Eye2Eye experienced a downturn of 10 percent in visitor numbers, to 2,200 over three days, Dixon said she was pleased with the quality of buyers visiting.

The downturn, she said, was due to the distance between Eye2Eye and the coinciding Pure show and rtw shows at London Fashion Week.

Although the weak dollar and strong pound may be keeping U.S. buyers away, it’s having the opposite effect on U.S. exhibitors, whose product has proved attractive to European buyers because of the favorable exchange rate.

The U.S. brand CBGB exhibits at Londonedge and, as Hunter explains, “it’s attractive to be able to pay $10 for a piece you would happily pay 10 pounds for.”

At Eye2Eye, U.S. exhibitors included Ashley Dearborn and Josh Hickey, with U.S. brands Rebe, X-Large and Some Product at the Margin show, and Trovata, Greige and Milk Crate at TBC and FAO.

With regard to spending, organizers reported an upturn in business at the last round of shows, which some attribute to buyers beginning to loosen their purse strings.

“The market seemed to be much more buoyant, compared with past seasons, when buyers had been careful not to overspend,” said Mark McCann, organizer of streetwear show TBC.

Meanwhile, the U.K. Textile Forum, which will be held Oct. 6-7 at The Music Rooms in central London, has set its sights on providing a high-end boutique textile show for U.K. buyers who are not able to attend events such as Premiere Vision and Interstoff.

The show had around 26 exhibitors last season, including Laurent Garigue and Henry Bertrand.

“We’re not aiming to be a major exhibition,” said Linda Laderman, spokeswoman for the show. “We wanted to provide U.K. companies with access to high-end fabrics in a central London location.” Buyers at the show last season included representatives from Vivienne Westwood and Maria Grachvogel.

The biggest change to the U.K. trade show lineup last season was TBC and FAO’s move from their usual base in East London’s Brick Lane to Tobacco Dock, also in East London.

At this new location, McCann grouped the two shows together. Now they will share a common entrance, so that buyers who come to see the more mainstream brands at FAO have access to the niche brands at TBC, and vice versa.

“We’ve had an amazing response to the new venue,” said McCann. “It’s great, as the buyers can flow easily between the two shows.”

Londonedge is also changing venue, and reverting back to its original space, Olympia 2, after moving to North London’s Business Design Center for one season, and will be using the larger space to add 20 brands to its roster.