Mixing It Up in Milan

The most popular collections for fall based on Style.com page views during the first 12 days they were posted online.

By Cecily Hall and Emily Kaiser on March 16, 2006
View Slideshow 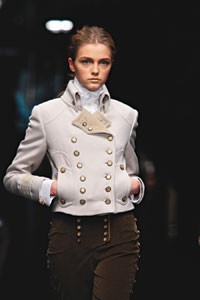 The most popular collections for fall based on Style.com page views during the first 12 days they were posted online.

Diversity was the word on Milan’s fall runways. “The Italian collections bid ‘arrivederci’ to ruffles and excessive bling, while saying ‘buon giorno’ to everything from austerity to disco glam,” said WWD. Designers drew inspiration from almost every era, from the Renaissance to the Nineties, and buyers pointed out the broad mix will give consumers plenty of choices next season. “There is so much diversity, which will be good for business,” explained Ann Stordahl, executive vice president of women’s apparel at Neiman Marcus. Some of the collections widely praised by buyers were Marni, Dolce & Gabbana, Prada, Fendi and Giorgio Armani. Page views during Milan Fashion Week topped 35 million for Style.com, the home of W and Vogue magazines, which, like WWD, is owned by Condé Nast Publications.

2. PRADA
Page views: 1,470,902
Prada, steadily holding its number-two ranking on the site from September’s spring showing, wowed ’em with a spectacular collection “rooted in Japanese, sports and medieval warrior references with no color and almost no embellishment,” said WWD. Looks in a dark color palette came across as clean and strong.

4. VERSACE
Page views: 1,350,927
Donatella Versace stayed away from femininity for fall and said she focused on the “warrior woman.” She worked mainly with navy, adding bits of color from time to time. The collection “was strong and at times boxy, especially in coats and jackets cut from sturdy cashmeres and shiny, slippery leathers,” said WWD.

This story first appeared in the March 16, 2006 issue of WWD. Subscribe Today.

5. GUCCI
Page views: 1,324,752
Designer Frida Giannini told her audience she was inspired by “vinyl records, especially David Bowie in the Seventies and glam rock.” She brought out ultrashort dresses and lean jackets over wide pants, mixing in crocodile jackets. WWD said Giannini is back in “sky-high heat for fall.”

6. D&G
Page views: 1,152,041
There’s no business like snow business for Domenico Dolce and Stefano Gabbana. The duo “buried their runway in a virtual avalanche of cozy knits, all done up in tasteful shades of ivory and white,” said WWD. Cardigans, bodysuits, skirts and legwarmers were in abundance on the runway, as well.

7. GIORGIO ARMANI
Page views: 1,039,321
“Sex sells,” explained WWD of Giorgio Armani’s collection, which focused solely on the sexy suit. “It came skintight with a short, flirtatious jacket and fanny-hugging skirt — delivered with an unmistakable Forties woman-of-mystery attitude.” Evening showed a few mistakes, but they “were countered by plenty of graceful alternatives.”

8. ROBERTO CAVALLI
Page views: 978,620
Roberto Cavalli took an East-meets-West approach, offering layers of fur, velvet brocades and embroidered dragons, but the collection was questionable. “Never was so little T&A flaunted on the Cavalli runway,” said WWD. His wife explained after the show, “The Cavalli woman this season is strong on the inside, but doesn’t need to show it.”

9. MARNI
Page views: 849,581
Consuelo Castiglione has been working to subdue her otherwise “kooky sweet” collections lately. For fall, she tapped into blacks and grays, showing off mohair cardigans with printed pieces and a geometric lace skirt. Though evening dresses weren’t well-received, the featherweight silk tops tied in the back and cinched coats certainly were.

10. BOTTEGA VENETA
Page views: 825,801
Tomas Maier’s fall collection was “an exercise in sophisticated proportions and luxe understatement,” said WWD. He showed expert tailoring in his shearling coats, neatly cut jackets and elegant skirts, but his plaid creations did not do as well. “These goofy looks…lacked the simple elegance of Maier’s tailored best.”

13. FENDI
Page views: 641,692
Karl Lagerfeld did it again this season, bringing femininity and sophistication to the Fendi woman with a continuation of structured looks softened by loose blouses and fluid dresses. Bubbled sleeves worn with high-waisted skirts and trousers, along with perfect fur details, have made Karl’s last two visits to Milan flawless.

14. JIL SANDER
Page views: 637,798
Raf Simons’ first women’s collection for Sander drew lots of interest: The collection leaped to number 14 after failing to make the Top 20 last season. The house continued the minimalist tradition of its spring show and before, WWD said, with “austere coats and graceful dresses channeling to the monastic serenity on which Sander built her business.”

16. BLUMARINE
Page views: 621,023
Anna Molinari was in limbo between simple and mature and her usual exuberance of detail and trims. Her Blumarine collection seemed confident at one moment, lacking the next. WWD reported a disappointing evening finale characterized by “complicated drapings and confusing cutaways.”

17. MAX MARA
Page views: 499,950
“Grunge Lite,” as WWD called it, perfectly “merged workaday and rebellious to create an office-safe look without any aggressiveness or sloppiness.” This fall’s collection paired tailored suiting and oversize knits; sequined tops and full-cut pants, and tuxedo jackets with minidresses that were spontaneous and refreshing.

18. EMPORIO ARMANI
Page views: 489,932
What started out to be a successful ready-to-wear collection showcasing smart coats and simple suiting became a circus of “silly hats and sillier skirts” not associated with the Armani customer. According to WWD, the only appealing aspect of this collection was the jackets, notably nylon parkas and short peacoats.

19. PUCCI
Page views: 486,782
After a dull spring Pucci collection from Christian Lacroix, the house’s wild prints were revived by Matthew Williamson. However, Williamson’s first collection lacked Pucci’s color and attitude, as the designer in his first season opted for black and gray combinations and only a few of the signature vivid brights that give Pucci its playfulness.

Source: style.com; the web site has a monthly readership of more than 1.3 million; the average age of the audience is 35.4, and the median income, $75,000; 86 percent of readers are female.