Mizrahi Gets Modern With Fur

Isaac Mizrahi will introduce some unconventional fur styles in his new collection for Alixandre Furs, which he is showing at Fashion Coterie. 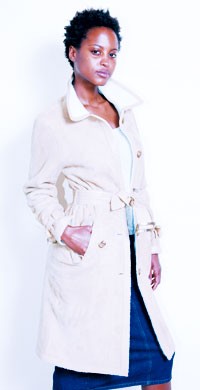 NEW YORK — Only Isaac Mizrahi could read fur as a silver metallic shearling.

That is among the unconventional styles in his new fur collection for Alixandre Furs, which is on display at the Fashion Coterie trade show through Tuesday.

Out to try to erase younger women’s somewhat dated view of fur coats, Mizrahi has come up with 14 mostly shearling-lined pieces, including a jean jacket, a cropped blazer, parka, peacoat and a toggle coat. Instead of being housed solely in coat departments of department and better specialty stores, the collection hopes to find a home in Scoop and other stores popular with style-conscious customers.

There are also plans for Mizrahi to do a more upscale fur collection with Alixandre, to be introduced in April, that will retail from $1,700 to $8,000.

During an interview Thursday at Mizrahi’s showroom, Larry Schulman, vice president of Alixandre Furs, insisted this is not another case of an absentee designer slapping his name on a new category. “We don’t take liberties here. We have good taste, but we’re not the designer.”

In fact, Schulman and Mizrahi have known each other for 25 years, since their days working with Perry Ellis. Once the madcap designer was doing his own line, he turned to Alixandre to make a big sable coat, which Iman wore in one of his first runway shows. “Remember? It was stolen after the show,” said Mizrahi.  With his varied interests and theatrical tendencies, there always seems to be a back story with Mizrahi, such as “the doughnut,” the designer’s nickname for a ring-shaped fur that was designed to be worn any which way, that Alixandre made for another runway show.

Mizrahi credits Schulman for teaching him the ropes about fur. “Yes, he’s graduated from our Fur 101,” said Schulman.

Isaac Mizrahi for Alixandre will retail from $1,400 to $3,000 and is expected to be sold in 100 stores this fall. First-year projected wholesale volume is between $2 million and $2.6 million, Schulman said.

Tracy Geller-Doyle, vice president of marketing and sales for Isaac Mizrahi for Alixandre, said, “I don’t anticipate walking into the Coterie and seeing anything like this. Isaac and Larry have really gone to bat to put the best line out there.”

Truth be told, Isaac Mizrahi for Alixandre is one of the first collections Coterie shoppers see, since the booth is strategically positioned right near the main entrance. Don’t look for the “Unzipped” star to be hawking the line, though. Oprah Winfrey has called on his expertise for a post-Oscar critique on her show today. As for whether he will plug the new fur line on the show, the enterprising Target designer said: “Oh, I don’t know. There’s so much I have to mention.”