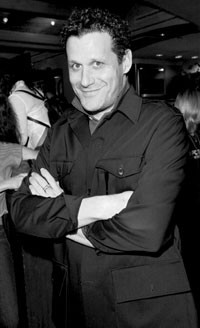 NEW YORK — There are highs and lows in every career, but few designers can balance them on a single runway like Isaac Mizrahi.

Mizrahi is planning his first fashion show in six years, a June 14 spectacle at Cipriani 42nd Street here that will combine looks from his ultra-luxe custom collection and his all-access Isaac Mizrahi for Target line. It’s a pioneering concept of pairing $20,000 ballgowns with $20 T-shirts, one the designer believes will demonstrate that the worlds of rarified luxury and mass retail are not as mutually exclusive as they have been in the past.

That’s not to say Target Stores will be stocking Mizrahi’s $15,000 tweed suits trimmed with Baccarat crystal buttons ($100 a pop) next to the $12.99 nylon-and-rayon twinsets bearing his label in its 1,249 stores nationwide anytime soon. His high-end collection, sold on a piece-by-piece basis from Mizrahi’s Greenwich Village studio for the past year, is destined for the other extreme of the retail spectrum under a new deal with Bergdorf Goodman, which will open a Mizrahi in-store shop the day after the show.

“The high and the low —?that’s what my world is now,” said Mizrahi, who aside from multiple TV projects and one-man cabaret shows has spent the past year rebuilding his presence in fashion with the coincidental launches of Isaac Mizrahi New York at the upper strata and Isaac Mizrahi for Target for the masses.

The Target collection landed with a big splash, with TV commercials, major print and outdoor ad campaigns and a temporary “pop-up” shop in Rockefeller Center for its launch in August. It’s all part of the $41.35 billion retailer’s efforts to promote itself as a destination for well-designed merchandise, with exclusive product lines from such designers as Todd Oldham, Cynthia Rowley and Mossimo Giannulli.

Mizrahi’s made-to-order collection, at the other extreme, has only been promoted by word of mouth, and as the least visible of the designer’s many activities attracted only a handful of customers willing to pay in the four-figures for a beaded blouse since the line debuted in June. Mizrahi estimated he has produced only 15 looks for his personal customers, compared with a Target order for a pink duffel coat of 20,000 units — and that was considered a small run.

Target’s commitment to sponsor a runway show for both lines and Bergdorf’s decision to create a space for Mizrahi alongside its American “couturiers,” means that, at least for one night in what is being described as a $1 million production, the designer’s two collections will get equal billing, with Target footing the bill.

For Target, the appeal of mixing high design with low prices inspired the initial approach to Mizrahi in 2002 to develop a designer-branded collection for its customer base over 25 years old, building on the success of the younger-skewing Mossimo collections. John Remington, vice president of events marketing and communications for Target, described the Mizrahi collection as having performed “very well” and “exceeding expectations,” but he would not discuss its sales beyond anecdotal terms.

“He is doing so well with us,” said Remington, noting that the company, which also uses an unconventional approach in its graphic advertising and marketing campaigns, was equally intrigued by the prospect of a runway show that combined the different price points. “It’s going to be a real high-low story, combining both the aesthetics of the collection and the couture, as well as blending in a fun new concept.”

Analysts have been impressed with Target’s use of designer cachet under the leadership of Gregg Steinhafel, president of the Target Stores division. A.G. Edwards & Sons analyst Robert Buchanan described the Isaac Mizrahi line as a “great” performer for the store, noting that “Gregg’s whole philosophy is to keep rotating in new brands in apparel and Isaac is just one more manifestation of that.”

Smith Barney analyst Deborah Weinswig said, “I know it’s been a traffic driver and haven’t seen much of the merchandise marked down.”

Target is approaching the runway show as a marketing vehicle for the collection, although it is not likely to wind up as a backdrop for one of its TV commercials, such as the recently released spots that feature Mizrahi’s vocal rendition of “I Believe in You.” The show is planned to include pieces from several of Target’s upcoming monthly deliveries for the season, as well as some items that will be available immediately at target.com. Guests will also receive a Target catalogue from which they can order pieces from the collection. The Target line retails for about $9.99 to $29.99, whereas the pieces for Bergdorf’s are expected to retail from $8,000 to $25,000.

“It’s cool that these things can be shown together,” Remington said. “It wasn’t too long ago that Target could not even be considered to advertise in certain fashion magazines.”

Mizrahi is planning to show about 20 to 30 looks from each collection, with elements combined into a single outfit. One example he gave was of a cashmere and Lycra spandex shrunken cardigan, plus T-shirt and leggings from Target, worn with a tiered gray flannel lace ballgown skirt reembroidered with cashmere, beads and pearls from the high end.

From the designer’s perspective, showing the pieces together is an idea that fits into the increasingly democratic mind-set of consumers who more frequently blend designers, styles and price points to create an individual look.

“What I love about inexpensive clothes is their honesty about their function in my own life,” Mizrahi said. “I have two polo shirts from Gap that I would pay $1 million if I could find more of them. Does it look cheap or expensive? That’s not the point. Even if I buy something really expensive, and then never wear it, it’s all about taking the risk as a customer. Something is worth what you make it worth.”

Mizrahi’s success with Target has served as a creative catalyst for the designer, as he is continually introducing categories for the store, such as the recent additions of swimwear, lingerie and sunglasses, plus optical glasses to come. With Marisa Gardini, who has remained with the designer throughout his career and now is the chief executive officer of Isaac Mizrahi New York, Mizrahi is far more enthusiastic about his prospects than he was in 2000, when he recounted the depressing demise of his Chanel-backed venture in a one-man stage show called “Les MIZrahi.”

Since closing his signature ready-to-wear line in 1998, his career in television, including three seasons on the Oxygen network, was a welcome break from the toils of Seventh Avenue, but whenever someone mentioned a fashion week in passing, he felt “a maternal pang.” Building a space for his made-to-order business at Bergdorf’s, he said, will give him the opportunity to rebuild the high-end business in a meaningful way with individual pieces, rather than trend-driven collections.

“I like the idea of not seeing things so seasonally,” he said. “Women who come in to the Bergdorf Goodman salon will be seeing a fur-trimmed suit and a bikini side by side. That’s because she is going to her house in Mustique at least three times in the fall. I want to make really elegant clothes for women, clothes that look finished, put together and American. It’s not cheap clothes wishing to look expensive or expensive clothes looking to be cheap. That’s all been done before.”

At Bergdorf’s, the collection will be carried on the fourth floor alongside the collections of Maggie Norris, Charles Alexander and John Anthony, who all specialize in custom-made designs. Robert Burke, vice president and senior fashion director at Bergdorf’s, said Mizrahi’s reputation as a creative force made him an ideal addition to the store.

“Isaac has always remained such a strong design force with people that understand high-quality clothes,” Burke said. “These are truly custom garments. Isaac has always done incredible runway pieces, but there are also great day dresses and coats. It’s not often that one can have a total custom gown, dress or jacket designed by someone as recognized as Isaac. Really, no one has done that kind of thing at his level, except at the couture in Paris.”