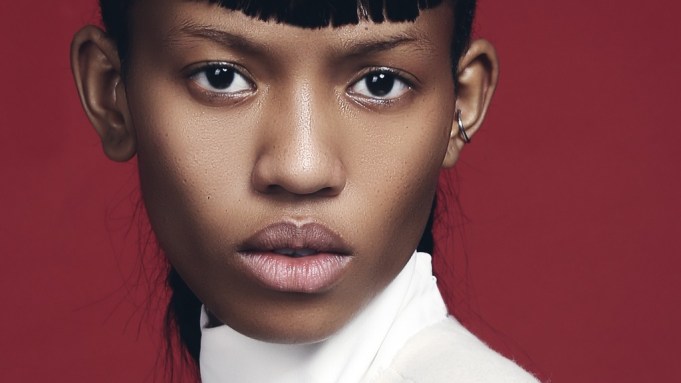 Adesuwa Aighewi, the half-Nigerian, half-Chinese model, is experiencing something of a second coming. Back in 2010 and 2011 — after being discovered on her college campus in Prince George’s County, Maryland, of all places — Aighewi appeared in editorials for Seventeen and Elle as well as a BCBGeneration campaign shot by David Roemer (which she was cast in “by accident,” after an agent spotted her and booked her on the spot). Then she took a hiatus to focus on finishing her chemistry degree, before decamping to Los Angeles, where she rekindled her career with a focus on commercial modeling work.

Now 24, Aighewi moved to New York full-time this past January and she’s been enjoying a steady stream of work ever since. On the highs and lows of her career, she had a refreshingly blunt perspective: “It’s been bulls–t until this year,” she said, before explaining that she had been formerly signed to an agency that wasn’t representing her the way she wanted. “They had a vision for me and I didn’t like it at all,” she continued. “They wanted me to get breast implants. I wasn’t getting good jobs. It didn’t work out.”

Now signed with One Management, Aighewi recently shot editorials for i-D and Nylon as well a soon-to-be-released ad for Tom Ford, and she’s been all over the spring 2015 runways in New York and in London in shows such as Vivienne Westwood, KTZ, Rebecca Minkoff, DKNY and Mara Hoffman. “They’re great,” she said, of her new agents at One. “I get to be myself and not be some cookie-cutter girl.”

Aighewi’s tomboyish style (accentuated by a partially-shaved hairdo), sense of humor and open-book attitude were immediately palpable on a recent afternoon at WWD’s office, when she stopped by between castings on a busy day.

WWD: You have an interesting background. Tell me about growing up.
Adesuwa Aighewi: My dad is Nigerian and my mom is Chinese, from Bangkok. I grew up everywhere. I was born in Minnesota, but I grew up in Nigeria — I lived about half my life there, half here [in America]. We moved around a lot because they are both environmental scientists. For a while I was living in Indiana, just following my parents who were doing research in really weird places.

WWD: How did you start modeling?
A.A.: Because my parents are super nerdy, I’m also really nerdy, and I started college when I was 15. I got scouted there at the University of Maryland. My friends were always like, “You should be a model. You shouldn’t be here.” I was studying chemistry and I had no interest whatsoever in modeling. It never occurred to me ever, at all. Everyone would say I’m pretty, but I would be like, “I don’t care.” The standards of beauty everywhere else are so different than in America. In Africa, I was [considered] so scrawny. They don’t like that there.

WWD: Did your career immediately take off?
A.A.: It was a mess to do both school and modeling — I couldn’t do both chemistry and see clients at the same time. I was coming to New York [for castings], and I was like, “No, I can’t do this.” I spent a summer in New York modeling, but then I quit. This is during college. My agency wasn’t pushing me for fashion week; they kind of put me on the back burner. So I quit and said I’m just gonna finish college.

WWD: And then you spent some time in L.A.?
A.A.: I went to L.A. for a while — I had a boyfriend out there and I was doing lots of commercial work. Then I moved to New York this past January, cut my hair, and said, “I’m just gonna do me now.” New York is awesome. It’s been going pretty smooth. I moved to a new apartment in Harlem three days ago, right in the heart of it all. I have some Parisian roommates.

WWD: What’s your favorite part of the business?
A.A.: I like doing videos. I was in Brandon Boyd’s music video last fall — the guy from the band Incubus. It’s so tight. I feel like when I’m not talking, I have constant “b-tch face.” People think I’m this really mean person, but I’m not! I’m a dork. But in videos, I can talk and you don’t think I’m crazy or scary. People are doing those a lot more now.

WWD: Do you ever think about what path you would have taken if you hadn’t begun modeling?
A.A.: I do think about it. Even still, I’m like, “Should I still be doing this or not?” I hated chemistry, though. I didn’t like it. I just did it because my parents wanted me to do it. So I said, “Sure, I’ll do it for you guys.” I had zero interest, none. But I was good at it. I wanted to do art, but my parents were like, “You’re gonna be poor.” I have Asian and African parents, they’re crazy, OK!? [laughed.]

WWD: So your parents aren’t exactly jazzed about your career…
A.A.: They don’t think modeling is a real job. They don’t understand modeling. They think it’s [Playboy] Playmate type stuff — they’re in another world, and they have no idea. They are waiting for me to fail, I think.

WWD: What have you learned in all of your experiences?
A.A.: I grew up a lot quicker in the sense that — in Nigeria, they never taught us American history. I never knew about racism or anything like that. Even when I moved here, I moved to Indiana in the suburbs, and I never really witnessed it. But in modeling, you really see how they class you based on how you look. That was a crash course in American history 101.

WWD: Do you think the modeling industry should be changed in any way?

A.A.: Girls have this idea — girls who are really young — that they know everything. I’m looking back on when I first got signed and I was so dumb. I thought I knew everything, but I didn’t know squat. Anybody could’ve told me anything, and I would’ve said, “Sure!” But some people are creepy in this industry. The younger they think you are, they wanna creep on you hard.