After spotting the wide-eyed blonde in another girl’s photo, model agent Chantale Nadeau put her social-media skills to work. 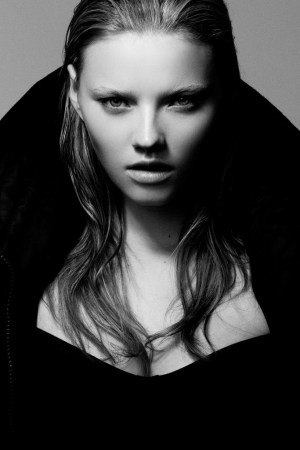 Alanna Whittaker can attest to the merits of Facebook stalking. After spotting the wide-eyed blonde in another girl’s photo, model agent Chantale Nadeau put her social-media skills to work. “[Nadeau] went to my Facebook page and started creeping,” the now 21-year-old says. “She sent me a message like, ‘Hey, have you ever thought about modeling?’” Just over two years — and some brief skepticism — later, Toronto native Whittaker is now at home in New York, where she is repped by Ford Models. WWD recently sat down with her for a quick chat.

WWD: You recently returned from Tokyo. How was that?
Alanna Whittaker: I love Tokyo — I have a love-hate relationship. I love the city and I love the people I meet, but it’s a very stressful market. You’ll get picked up at 5 a.m. and you’ll go to castings ’til 10:30 at night. But I do like it.

WWD: What were some of your jobs?
A.W.: Oh God, you do everything. A lot of magazines — I did Numero a few times, and I did Vogue Japan. The Vogue shoot was probably the worst shoot that I’ve ever done, but also the best. They had, like, a greenhouse in a white studio with windows as the ceiling and walls. The sun was shining in, and I just stood against the wall as the sun was shining on me all day. Then they had two mimic suns made out of lights also shining on me. I had to look at them all day, and by the end of it I was almost crying because my eyes were burning so bad. But I was like, “It’s for Vogue, it’s worth it.”

WWD: What is the biggest culture shock over there?
A.W.: You’re pretty tall over there — especially if you’re walking in heels. Then they’ll stop and take pictures of you.

WWD: Are you excited to be back in New York for the summer?
A.W.: I don’t know. It’s going to be hot!

WWD: What are some of your favorite New York activities?
A.W.: I would say going to Central Park is number one. That would be my main hot spot. I’m from Canada, and I live in the country, so it’s nice to kind of get away to where there are not so many people and be away from it all.

WWD: How often do you go home to Toronto?
A.W.: It’s so easy to go back and forth, because it’s an hour flight and not that expensive, so I go home at least once a month. I used to take the bus back and forth, thinking it was cheaper. That was a dumb idea.

WWD: Any nightmare bus stories?
A.W.: I always try to sit toward the front because the creepers head toward the back. There are some people that are a little weird, and you have to go through the border. That’s kind of entertaining sometimes, because you’re like, “What’s going on?” and they’re going through all of these people’s stuff. Some people are a little sketchy with their stories. But yeah, not taking the bus anymore. That was a mistake. Live and learn.