Alexandra Elizabeth Ljadov walked a whopping 74 shows on the fall 2015 runways, making her one of the season’s top catwalkers. 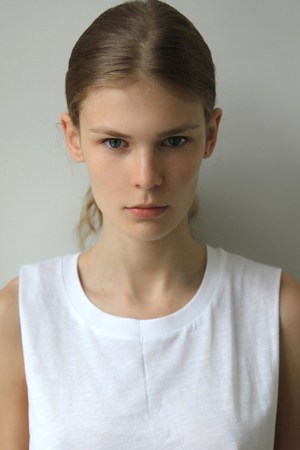 Alexandra Elizabeth Ljadov, repped by Society Management, walked a whopping 74 shows on the fall 2015 runways according to Models.com, making her one of the season’s top catwalkers. Now, unsurprisingly, the 17-year-old Estonian model is well on her way to becoming a star. In the month of April alone, Ljadov emerged as one of the faces of Gucci’s pre-fall 2015 campaign — the first ads conceived by Alessandro Michele since his appointment as creative director of the brand — and also appeared in editorials for French Vogue, Vogue Japan and Flair. The blonde beauty with prominent cheekbones — who is based in New York and busy looking for a new apartment — also scored a coveted spot in Saint Laurent’s summer campaign.

“I didn’t expect to do even more shows than last time,” Ljadov said, reflecting on the fall season. “But now, I feel proud and ready for a few days’ worth of vacation — preferably in Costa Rica — before going back to work again.”

Alexandra Elizabeth Ljadov: I was discovered in Estonia at a grill festival, literally while I was eating meat with ketchup. A lady asked me if I would be interested in modeling, and later, I told my mother. She then searched the best agencies in Estonia, and I had a meeting with my mother agent who I absolutely loved.

A.E.L.: I was born in Tallinn, the capital of Estonia, but when I was three we moved to a small town called Pärnu when my parents got divorced. I remember on weekends I went to visit my dad. We always went to the movies and got a huge bag of gummy bears that we could never finish. In third grade, I moved back to Tallinn, where I met my best friends. We loved climbing trees, playing detective and we even built a tree house, so I was extremely active. I was obsessed with sports, and I also started dancing when I was three. During summers I liked to participate in marathons, triathlons or go wakeboarding and surfing. I still do.

WWD: Growing up, did you ever think you could be a model?

A.E.L.: Outside on the playground I definitely acted like a little boy, but my friend and I used to re-create shoots that we saw on “America’s Next Top Model,” and we also dressed up and filmed dance videos, so I guess I had both sides in me. My mum’s friends always told her that her daughter could be a model, but I never paid attention to it. It was only after my first show, Proenza Schouler, that I knew this was the place for me.

WWD: Where do you live now?

A.E.L.: I live somewhere between my home in Estonia and New York. I often go back to Europe to catch up on schoolwork, but now I have spent so much time in New York that it feels like a second home already. I remember when I was 13 my mum took me to New York, and after that I was sure that this is the place where I will live when I grew up. It is funny how things just happen.

WWD: What do you do for fun here when you aren’t busy working?

A.E.L.: I am obsessed with going to the movies (mainly because of the popcorn), but I also like to go to concerts, visit museums or other interesting places like UNESCO [World Heritage sites], and walk around the city and the park because there is just so much inspiring happening around you. I always try to carry my Polaroid camera with me in case I find something interesting to shoot, and I love making films and editing them.

WWD: According to Models.com, you walked 74 shows this fall — opening four and closing two. What were some standout moments?

A.E.L.: One was the insane walk at the Maison Margiela show. I was honored to get the chance to be an actress on the stage and own the whole room. Also, I had the chance to meet John Galliano for the first time. Another was having breakfast during the actual show at Chanel — Karl always comes up with the most genius ideas. Prada, Proenza Schouler and Louis Vuitton all gave me so much energy, and I am always very excited because the collections are amazing. But the ultimate moment was taking a Polaroid with Jack McCollough and Lazaro Hernandez this season, because my first show ever was for them, so that was very meaningful.

WWD: What were some of the most stressful moments?

A.E.L.: One of them was when I had only half an hour between two shows in London, but the traffic was horrible so it was impossible to make it. Then, my driver took me to the wrong place, and of course my phone was going crazy at that point. I arrived almost half an hour after the show was scheduled to begin, but luckily, they actually waited for me.

WWD: What are your tricks for staying focused?

A.E.L.: The most important thing to have is the strength of will and a good support system. For me, I need to have my sugary ice cream to keep my mind sharp. Some other things that work are chocolate and multivitamins.

WWD: Do you have any funny memories from the shows?

A.E.L.: I feel like this was the season of fails. For example, in Milan I judged a door swing wrong and slammed my head against it right before the fitting. Then, in Paris, I fell down the stairs because another lady knocked me over. Also, one morning, I woke up with a huge purple bruise on my butt. I have no idea how I got it, but I probably fell out of my bed or something. But the funniest moment of all for me was when my friend dropped her bag in the middle of the catwalk.

WWD: What was your favorite hair-and-makeup look?

A.E.L.: I really liked the abstract smudges made with fingers around the eyes at Proenza Schouler, designed by [makeup artist] Diane Kendal with the idea that each model was an individual. I loved the sparkly nose rings and stones by Pat McGrath on our faces at Givenchy because of the unique vibe. My favorite hair look was the funky Prada ponytail by Guido Palau. And the whole Alexander McQueen look captured the atmosphere of the mysterious collection perfectly.

WWD: What do you carry with you at all times during fashion week?

A.E.L.: I always had my Polaroid camera, because everything around me was so inspiring that it made me feel like I wanted to create something, too. Taking Polaroids is exciting because you never know how it will turn out. Some other things I always had with me were bubble gum, my phone for Uber and e-mail, a book to read while I am waiting and my sleeping bunny for good luck.

WWD: What do you do backstage to pass the time?

A.E.L.: [Besides] taking the Polaroids, I was also filming little behind-the-scenes clips for [fellow model] Harleth Kuusik and my seasonal fashion-week video. I think it has become our tradition now. Whenever there is cake, it is impossible to leave the catering area. And of course, I try to meet new, interesting people and always have a good laugh with my friends.

WWD: What did you do after the shows every night?

A.E.L.: I tried to have dinner (OK, mostly french fries with ketchup and milkshakes) whenever I had the time, or I hung out with other models and my agents. During Paris, my mum came for a few days, so I spent time with her. Most of the time, our dinners ended up being takeout boxes served in the backseat of my driver’s car. The best part was definitely going to bed at the end of the day.

A.E.L.: Usually I am not that obsessed about celebrities, but when Ben Stiller and Owen Wilson closed Valentino while re-creating “Zoolander,” I have to say I was a bit starstruck.

WWD: Have you learned any lessons about fashion week from when you first started walking in the shows?

A.E.L.: I have learned to see the bigger picture now, that there are hundreds of people who work for the same goal, and it is magical how well everything comes together at the end. Now, I am not overthinking everything as much as I used to, and I just go along for the ride, because there is no point to stressing about things you can’t change. And during my time running around four completely different cities, I have learned to dress for all kinds of weather, which becomes extremely useful in all aspects of life.

WWD: What would be your advice to a model walking the runway for the first time?

A.E.L.: I know it is going to be the best moment of her life. The energy she gets from it is insane, so I would encourage her to give it her all and live in that moment. She is going to remember that for a long while, and every time she remembers that moment, it will make her very happy. At least, that’s how it’s been for me.

A.E.L.: There is so much that I want to achieve. I am like an athlete who thinks one goal isn’t enough, and I always strive for more. I feel like there is always room to grow and develop, but I would love to work with as many legendary photographers and brands as possible along the way. When I am older, I would like to direct a short movie and create many fashion films. I want to stay true to my vision, create art, deliver a bigger message to the audience and inspire people like I have been inspired. A random goal is to run the New York Marathon, and as always, I want to make my father proud of me.