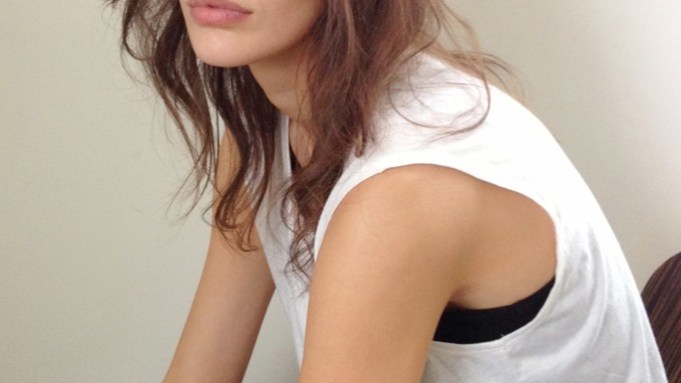 Amanda Murphy is leading a double life. Earlier this week the IMG model opened and closed Prada in her first season, walking alongside the likes of Adriana Lima and Jessica Stam. And then there is her day job. “At home in Chicago, I am a part-time radio technologist,” says the 24-year-old. “I do medical imaging for nonemergency patients. When I’m not behind the lens, I’m the one being photographed.” Straight out of a fitting for Dries Van Noten, Murphy called WWD to talk about her very busy fashion month.

WWD: Now that you’re in Paris, the last city of ready-to-wear collections, how are you feeling?
Amanda Murphy: I’m good. I’m confident that I’m going to push strong throughout the rest of the week. Relaxation is just a week away.

WWD: How does it feel to have such a huge season right off the bat?
A.M.: I think in everyone’s career things just start falling together at the right time and everything happens for a reason, and for whatever reason this season has just been going amazing for me, and I feel very privileged to be a part of the experience.

WWD: You were an exclusive for Proenza Schouler in New York. What was it like to do that show?
A.M.: [Jack McCollough and Lazaro Hernandez] are so creative and funny. They’re super approachable. Sasha Pivovarova had her baby back there, and everyone was around the baby. The baby was definitely the celebrity backstage.

WWD: Were you nervous beforehand?
A.M.: I was not. My second look, that lace dress, was so delicate that they were a little nervous about doing the change, because it was going to be pretty quick. We did a practice run-through, and it was no big deal, so we were prepared.

WWD: When did you find out about your lineup at Prada?
A.M.: I met with the team in New York, and from then on I just went with it. They’re very private about their work and what they do, so from then on it was kind of day by day. I didn’t know I was going to be opening and closing the show until I was backstage getting dressed.

WWD: Who gave you the news?
A.M.: They kind of came up to me as a team. It was as we were getting in line, and they were like, “Amanda, we need you first.” It was very surreal, and I’m almost kind of glad it worked out that way because there was no time to be nervous.

WWD: What do you do to keep sane through all of this?
A.M.: The biggest problem that I’ve noticed is you are so busy that you forget to drink a lot of water. And then all of a sudden you’re like, “I’m feeling kind of dehydrated.”

WWD: When did you start modeling?
A.M.: At 17, so I did most of my schooling online, because I was traveling. I did all of the anatomy and physiology and I did the medical terminology and all that stuff online. But then it got to a point that I had to take a break from modeling and do my in-hospital clinical training or my prerequisites for college were going to expire. So I was really upset about leaving, but I could not do college all over again.

WWD: How do you balance the two jobs now?
A.M.: I really don’t know how, but it’s working out. Instead of being part time, now I’m like, “I’m in town; I can take hours.” And [my coworkers] have been pretty flexible so far.

WWD: What do they think about your being a model?
A.M.: I’ve kind of been living this double life, and I’ve kept it on the down-low. I haven’t really discussed the extent of my modeling. They had no idea I was doing big stuff like this, but now it’s kind of everywhere. When I go home I’m going to have some explaining to do.