The 18-year-old DNA-repped beauty turned it out with her debut season, booking 15 fall shows. 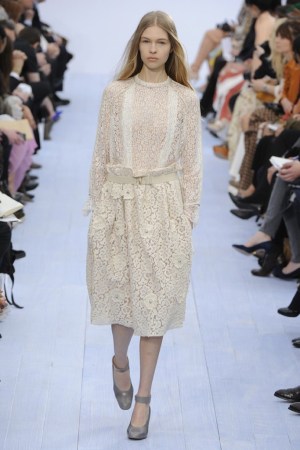 Perhaps the most organized model on the planet, Amanda Nimmo is holding a map of Manhattan, tiny yellow stickers dotted across it. “I use them during fashion week to mark where I need to go,” she says. “I write like ‘#1,’ ‘#2,’ ‘#3’ on them so I know the order of the castings. My booker saw it and was like, ‘Oh my god, you have OCD.’” The system must be working; the 18-year-old DNA-repped beauty turned it out with her debut season, booking 15 fall shows including Peter Som, Giles, Chloé, the latter which she closed. WWD caught up with the Canadian stunner — icy blue gaze, full pout and all.

How long have you been modeling?
I started full time when I graduated high school last June so it hasn’t been a full year yet. I was scouted the year earlier but I didn’t really do anything while I was in school, just a couple jobs here and there. I was one of those people who really loved high school. I wanted to finish and be happy with my grades so I decided to concentrate on that.

You’re 5-foot, 9-and-a-half-inches tall. Were you that height when you were scouted?
Yeah, I had an early growth spurt — I shot up in seventh grade. I used to have these huge chubby cheeks then, too, but when I spurted up they sort of thinned out. I recently ran into some people I hadn’t seen since I was a kid and they were like, ‘Amanda? Is that you?’

What was your very first shoot?
A little campaign for Aldo. I remember being so taken by everything, like, this is what I do? And when they told me I was getting $1,000 for the shoot and I was like, ‘Holy crap! Why am I getting paid to do this?’ It was my first real paycheck.

Has modeling gotten easier since then?
Yeah, I was actually just talking to my roommate about this. You would think you either have it or you don’t, but I’ve definitely gotten a lot better since I started. I think my main thing was feeling comfortable enough to get creative with the poses and taking the story and putting what you’re doing into that context. Looking back, I probably looked so awkward. I was loving it but I’m sure everyone else was like, ‘Oh god…’

You missed the spring 2012 shows due to visa issues, so this past February was your first time doing a full round. How’d it go?
Doing all the cities was wicked. I really enjoyed it. Half of it is that I got really lucky with my roommates. I already knew all the girls so we’d just come home and exchange horror stories from the day.

What kind of horror stories?
Like one of us would come home at 3 a.m. and be like, ‘I’ve been in a fitting for five hours.’ We all texted each other with things like, ‘Been sitting here for three hours, still waiting, client hasn’t shown up.’ Then we’d get home and whip out our food, have a feast and go to bed.

What was the worst modeling story you’ve heard?
I was on the 5 a.m. flight from London to Milan and the whole plane was full of models. At customs, they said, ‘Uh, no. None of you can come into the country.’ We all had jobs that day but we all didn’t have work visas. No one told us we needed them. It was my first time in Milan for fashion week but apparently if you have an invitation from your agency, it all works itself out somehow. So they put us all in this small waiting room; there must have been 25 of us. We were sitting there for hours. I was thinking, ‘So, is Milan Fashion Week just not going to happen?

So what happened?
The agencies ended up taking care of it so they let us go one by one.