WWD sat down with the the 21-year-old Moldova native to get the scoop on her pre-fashion-week game plan. 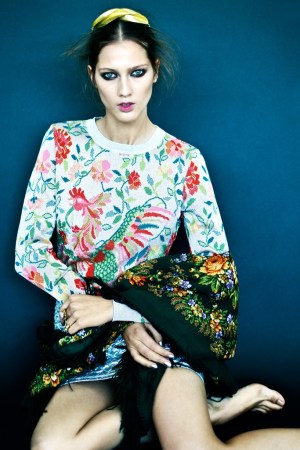 With New York Fashion Week just nine days away, Ana Gilca is sneaking in any sleep while she can. “I went to see ‘Django Unchained’ yesterday and I fell asleep after 10 minutes,” the Wilhelmina model says. “At the end, I woke up and my boyfriend was like, ‘That was the best Tarantino movie ever.’” After a two-year hiatus, the 21-year-old is in full preparation mode for her runway return. WWD sat down with the Moldova native to get the scoop on her pre-fashion-week game plan.

WWD: What castings have you been to already?
Ana Gilca: Yesterday I had Marc Jacobs. I’ve known the casting director since I started, basically. The casting only took 10 minutes. I was the first one because I got there near the end so no one was waiting.

WWD: Have you ever done his show?
A.G.: I did New York two years ago, but not Marc Jacobs. I wish! But, I’ve done other shows. I did Christian Siriano, Tracy Reese, Rachel Roy. I did 12 shows, I think.

WWD: Why did you take a break from the runway?
A.G.: I changed my agency so I had to change everything. It took quite a while to do it. I am excited to get back. I’ve been waiting so much. You do so much prep for the show, but you get so much energy from the people. For me, it’s more fun than editorial.

WWD: Do you try to eat well leading up to fashion week?
A.G.: Well, I just got a pizza yesterday. How healthy is that? Normally, I promise myself that I’m going to have a pizza and Coke after fashion week, but it just happened like that. Oops. I’ve got the excuse that it’s too cold and I need energy, so pizza is perfect.

WWD: What have you learned from your past runway experience?
A.G.: To be patient. You need a lot of patience to keep doing it. It doesn’t matter how tired you are, but I get something from that. I get energy.

WWD: How did you start modeling?
A.G.: Accidentally. I went for model courses in my country, but it’s supposed to be for four months and I only had money for two. Then, for the first time in the history of my country, a French agency came. I didn’t mean to go to the casting. I was just going to watch my friend and see how she did. Then [the agency] asked, ‘Can you go with them?’ And now my friend doesn’t talk to me anymore. It happens.

WWD: What were your initial thoughts?
A.G.: For my first casting, I went dressed in sports stuff. I didn’t know what modeling was! But they booked me, so that was weird. I came dressed like a boy in my baggy pants and was just like, “Hey, my name is Ana Gilca,” because that’s all I knew how to say in English at the time.