Aneta Pajak is the latest model to stun with her strut: with her creeping, cowering performance down the runway of Maison Margiela. 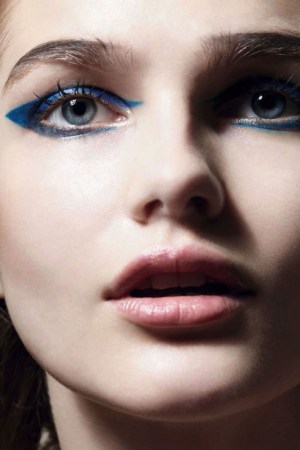 From Karlie to Naomi to the theatrical Pat Cleveland, many models have been celebrated for their walks. The latest to stun with her gait: Aneta Pajak with her creeping, cowering performance down the runway of Maison Margiela’s fall show. Since then, the 22-year-old, Paris-based Polish beauty has walked (in a more conventional fashion) for the Dior and Chanel resort shows and appeared in editorials for WSJ, Elle Poland and Vogue Germany. Pajak, repped by DNA Models, also scored another major coup as one of the faces of Gucci’s 2015 cruise campaign. “I like Paris, but now I’m thinking New York City could be better,” she said during her recent stay Stateside. And the thing Pajak misses most in Poland? Her older brother. “He’s the best person in my life. He’s a mechanic. He’s really proud of me,” she said.

WWD: Growing up in Poland, had you ever thought about modeling as a possible career path?

A.P.: In high school, my mother always said that girls need to be focused on what they have inside, not their appearance. I never used makeup, for example. My friends would say, “You should go to castings, you should try.” And I would say, “Thank you, nice to know that,” but I never would go.

WWD: So it sounds like it took some convincing…

A.P.: A photographer from my mother agency found me in a shopping center one year ago. They came to me every day because they wanted to sign an agreement with me, but I was not sure. I had a lot of questions. For me, I was never interested, and I had no idea how it worked. I thought maybe it wasn’t good for me. I thought that I didn’t quite fit the business, and that I had no chance. But finally, I’m here.

WWD: What were your plans before being discovered?

A.P.: I was focused on my studies. I thought that I would find a normal job, and have a normal life. I studied logistics: mathematics and economics. That is what I was looking for.

WWD: Since embarking on this career, have you befriended any models?

A.P.: During fashion weeks, it’s very fast. It’s easier to build relationships during shoots. During fashion week, you’re like, “Hello, goodbye, I’m off to my next show!” The most funny thing is that my real, true friends — they never ask me [specifics] about modeling. They only ask, “Are you good? Are you having fun?” They see just Aneta, not “model Aneta.” I’m so appreciative of that.

WWD: We need to talk about the fall Maison Margiela show, where you crept down the runway in a pretty spectacular fashion.

A.P.: John Galliano proposed that I be a character in the show. He explained what he wanted to see on the runway, and I agreed. Pat McGrath did my makeup. That’s it! Galliano is a person you can’t say no to.

WWD: Were you nervous? Did you have to practice first?

A.P.: On the runway, I felt like I was alone. I only focused on myself, and never thought about the people around me. I just played my character. Backstage, I had to [practice] in front of Galliano first, and I got applause. I was so happy.

WWD: What was the most challenging part of the runway season for you?

A.P.: The worst thing for me is that we haven’t any time to sleep. Sometimes you wake up at 6 a.m., you have fittings and castings all day, and you can go to sleep at 3 a.m. Every day can be the same. It’s not really healthy. After fashion week was over, I went back to my village [in Poland] and I slept for two whole days.

WWD: What is the most memorable moment in your career so far?

A.P.: I have a lot of memories. My first casting was in London, for my first client in my life. It was so crazy. I just came there and I was like, “Where am I going?” I had no idea about anything. I was really lost.

WWD: Have you developed an interest in fashion since you started modeling?

A.P.: When I open magazines, I can see my friends and I compare the collections… It’s just more for fun, though. I like to wear really simple things. Now I explore what I like. Modeling has helped me to find my own style.

A.P.: This was my first full season, so I want to have more seasons like this. You never know, the next season can be nothing. But in Poland, we don’t focus so much on the jobs. I just really like this lifestyle. I can meet people. I can travel. I can learn English and other foreign languages.