When she first met with her new Wilhelmina team in July, her “walk” was more of a waddle. Luckily, with some proper training, she worked out the kinks. 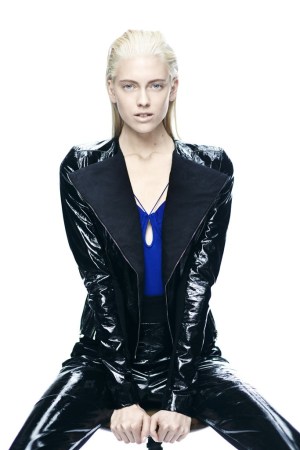 Young Faces of Pride: What the Month Means and What It Shouldn’t

When Anna Zanovello first met with her new Wilhelmina team in July, her “walk” was more of a waddle. “I’m a dancer, so my foot tends to stay outward like that,” the 22-year-old says, laughing. Luckily, with some proper training, she worked out the kinks. So much so that Joseph Altuzarra selected her to open his show. “It all changed after that,” she says. Zanovello gained some momentum from there, snagging some more enviable runway spots, including Theyskens’ Theory, Dolce & Gabbana and Giorgio Armani.

How did you get into modeling?
I was scouted in Verona two years ago. I was at this modeling competition, not to do it myself, though, but to watch a friend who was competing. I was there to support her, and then a scout came up to me and said, “I know an agency in Milan that would love you. Do you want to come see them?” And I said no. I was completely not interested.

Why not?
I was really focused on my dance studies. I wanted to become a ballerina.

So what changed?
I was in the dance company until I was 18, and during training one day, I broke my ankle, so I had to stop for a year. And the scout who had met me at the modeling competition was being really persistent; he was Facebook messaging me, saying he could speak to my parents if I wasn’t sure. So after I broke my ankle, I thought, Why not give it a shot?

Has ballet come in handy for your modeling?
Yes, people think it does in terms of movement. You learn how to feel your body and use it as a way to be expressive. And ballet takes a lot of discipline, which is something you need with modeling. Ballet teaches how to respect rules, because if you want to do well, you have to go to all your classes.

That must have helped during fashion week.
Definitely, fashion week was so hard. I thought I was going to die! It was just like run, run, run, run, run! From early in the morning when you wake up for your first casting until your last casting of the day, you’re panicking and rushing all the time. It’s so stressful.

This past season was your first fashion week. What did you find to be most surprising?
When Joseph Altuzarra chose me to open his show, I could not believe it. I had only done small shows before, and a few presentations. My heart was like ba-boom, ba-boom! When you see these girls walking with all the people watching, it looks like the most difficult thing in the world. But once I got out there, I felt normal.

Did your agency give you any tips on your walk?
It’s funny, when I arrived here in July, they said, “Okay now show me the Prada walk.” I said, “Uh, what? Does Prada have a different kind of walk?” And they were like, “Yes! There’s a Prada walk, a Gucci walk, a Gabbana walk.” I said, ‘I just know the Anna walk.’”