WWD caught up with the 20-year-old Dutch model before she jetted home to Holland for a few days. 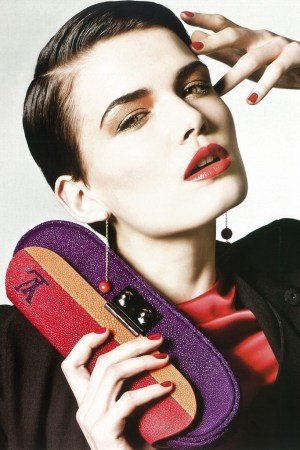 At nearly six-feet tall, with freckly skin and a boyish pixie cut, Anne Verhallen commands attention. The Dutch model, who’s now repped by Women Direct, has leveraged her androgynous, tough-girl appeal, landing on 16 runways for spring 2012, including Nicole Miller, Tibi and Jeremy Scott. We caught up with the 20-year-old before she jetted home to Holland for a few days.

How did you get your modeling start?

I was scouted on the street in Amsterdam by my mother agency a year and a half ago. The booker went up to me and goes, “How tall are you?” I was like, “What? Who are you?”

Was your hair short then, or did you cut it later?

It was short. I cut it off my last year of high school. I’m really close to my grandmother, and she’s this really impulsive person. Once when we were in her kitchen, she said to me, “You know, I’d really like to have these walls purple,” and she just painted them that day. So one day when I was in high school, we were talking, and I said, “I want to have my hair short.” I had really long hair, and I didn’t like that everyone else had the same thing. So she cut it! When I met my mother agency a couple months later, they were like, “We have to get you to a real hairdresser. This is all uneven.” It looked very poufy and Eighties.

Did you come to New York after signing with your mother agency?

No, I did a couple of test shoots in Amsterdam. Then, after my last exam, I flew straight to Milan with another girl, Iris Egbers, who just started with the same mother agency. We were there for a month. You look back now and you realize that it’s such a small city, and we would only have like three castings a day, but we were so overwhelmed since it was our first trip away from home! We were like, “How does this map work?” Now you have like 10 castings a day, all over big cities. You have to learn the subways quickly!

What’s the most surprising thing you’ve learned as a model?

Just that everything is so last-minute! You get confirmed for a job an hour before you have to fly there. I always think, They spend so much time and energy and money on these shoots and these jobs, wouldn’t you want to know what girl you have to work with like at least a week before?

You’re about to take a trip home to Holland. Any special plans?

Well, Thursday is my birthday, my 21st birthday, which I know is a big deal here, but it’s not really at home. What can you do when you’re 21 in Holland? I don’t even know. I mean, 16 is drinking, 18 is driving — 21 is actually nothing. I’m lucky, though, because I know I won’t have to work on my birthday since it’s Thanksgiving here. So I’m going to go out in Amsterdam with all my Dutch friends without worrying. I can be a little hungover for once!