The Dutch model recently chopped off her long blonde mane in exchange for a moody dark brunette pixie. 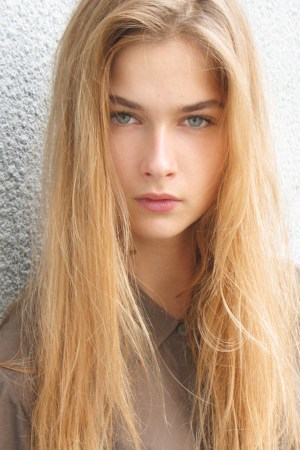 Attention casting directors: Dutch model Bo Don is working a whole new look. She recently chopped off her long blonde mane in exchange for a moody dark brunette pixie. “I love it,” says the 20-year-old, rubbing the back of her shorn head. “I think it suits me better, personality-wise.” Don, who’s repped by Marilyn, has been in the game since 2010 when she made her debut on Balenciaga’s fall runway, following up with Chloé and Yves Saint Laurent. Despite consistently landing some of the most coveted runway spots (read: Chanel couture, fall 2010) and editorials (Italian, Russian and British Vogue; Elle, and Dazed & Confused) since then, Don felt it was time for a change. Here’s what she has to say about it.

You look so different.

I know! Everyone’s like, “Really? Is that you?” I think it suits me better, personality-wise, than the long blonde hair. I use to do some commercial work. You know, the smiling, the jumping, the laughing. That wasn’t really me. I’m much more tomboy than girly girl.

Has the short cut been hard to get used to?

The weirdest thing was when I first cut it, I looked crazy because in the back all the hair would go in all different directions. The guy who cut it told me that would happen since I haven’t had short hair since I was a baby, so my hair wasn’t used to it. It was sticking out all over the place for a week.

Was it the agency’s idea or yours?

They wanted to darken it, and then after we did that, I was like, “Maybe we should just change it big time.” So we cut it about three weeks ago when I was in Paris.

Are you based in Paris?

I use to live in New York but then I moved back to Paris. But all my friends are here so I want to move back. That’s one thing I dislike about modeling: There’s no one real place you call home. I mean, I call Holland my home but I don’t really have my own place. You live in a lot of models’ apartments. You live out of your suitcase. That gets old.

Did you ever think about modeling growing up?

No, because I always thought it was like really pretty girls in dresses, very glamorous and girly and I felt more like a guy growing up. I didn’t wear makeup and all that stuff.

So how did you get your start?

I was 18, just finishing school, and wasn’t sure what I wanted to do. I had been playing soccer for eight years and was on a high level but when I finished school I didn’t know what to do so I thought, why not? So I e-mailed my pictures into my mother agency, Wilma Wakker in Holland.

What happened with the soccer?

I was training practically every day; it just became too much. I still play a bit when I go home because most of my friends are still on a team. But I have to be careful. I can be really pushy and aggressive. I feel like girls tend to be rougher. Girls can get mean, with the nails and stuff. I’ve been known to swing an elbow or two though.