Amid studying for finals, the DNA-repped model chatted with WWD by phone about her big break starring in a Louis Vuitton ad. 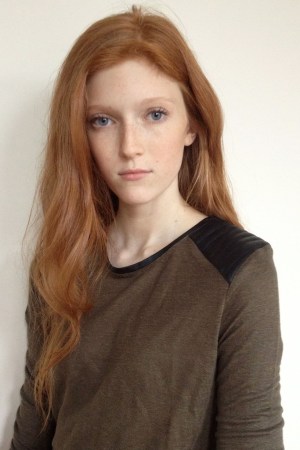 It’s not every day that a model is picked from relative obscurity to star in a Louis Vuitton ad. Of course, not every model has the flaming-red hair, freckled skin and enviable legs of 16-year-old Bria Condon. The Chicago native’s foray into modeling began years ago, after following in the footsteps of her older sister Chloe, yet there’s no sibling rivalry here. “She actually kind of loved that I was modeling,” Condon says. “I was her little protégé.” Amid studying for finals, the DNA-repped model chatted with WWD by phone about her big break.

WWD: What was your first modeling job?
Bria Condon: I did a local magazine when I still had braces. I was in eighth grade. I was with a male model, and he was so much older. I was so worried, but everyone was really nice. My mom thought it was hilarious.

WWD: How did you get started in New York?
B.C.: My agency in Chicago has castings with agencies in New York, so I just met with DNA and signed pretty shortly after that. That was maybe about two years ago.

WWD: What was your first big job?
B.C.: Well, Louis Vuitton is probably my first really big job. I don’t even really know how it happened. One day I got an e-mail saying I was an option for it, and that was crazy to even be considered. I didn’t think I would get the job because I haven’t done anything in New York yet.

WWD: Why do you think they picked you for the campaign?
B.C.: I don’t know! Everyone kind of has a twin, so I look a lot like my twin in the picture, Magdalena [Jasek]. As a redhead, I fit the look.

WWD: How did you find out that you had officially booked the job?
B.C.: My mom told me when I got home from school. She just blurted it out. I was so excited. This was maybe three weeks or so before the shoot. I was supernervous. I was like, “What do I wear?” I ended up borrowing some clothes from my sister, who is away at college.

WWD: Where did the ad shoot?
B.C.: It was a studio in Brooklyn. All of the models met at a Dean & DeLuca beforehand and took the van over there. Marc [Jacobs] was on set. He was really cool. I was like, “Is that Marc Jacobs over there?” He looked pretty relaxed — it was just another day on the job. He was pretty quiet, and just talked to Steven [Meisel] most of the time.

WWD: Was it a challenge to stay in synch with your twin?
B.C.: The floor was tiled, so they placed us exactly where they wanted us. I definitely got dizzy from having to stand still that long. The clothes were so awesome, though. It was so cool to try them all on. And the food on set was amazing.

WWD: What did you think of the hair and makeup?
B.C.: The hair took a long time to do — there were so many products. When we went home the first night, we were allowed to brush it, but not to shower.

WWD: When did you see the final ad?
B.C.: My sister sent it to me online. She saw it pop up on a Facebook page or something. I love it. It’s so elegant and pretty. I posted it on Instagram.

WWD: Will you be walking in any of the upcoming fall shows?
B.C.: I’m not sure. I still have senior year, so it’s another year of balancing school and work. Hopefully then I can move out to New York.