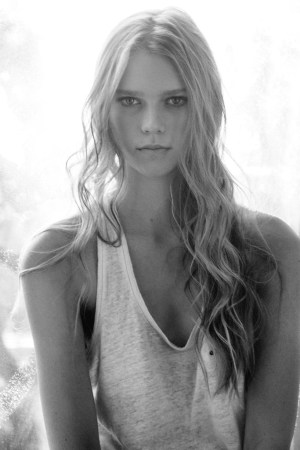 All Caitlin Holleran wants for Christmas is a YSL lipstick. Pretty normal request from a 16-year-old — except, unlike most, Holleran walked for the house as a worldwide exclusive during Paris Fashion Week. And she still wasn’t given a lipstick. “We didn’t get anything,” says the DNA-repped model. So after her mom asked for her wish list, Holleran sent her a photo of the YSL lipstick display at the mall. “Any one of these would be fine,” she told her. “It was my first fashion week show and I want something that reminds me of it.”

WWD: First of all, what does it mean to be a worldwide exclusive?
Caitlin Holleran: Somebody had to explain it to me. I was told there are so many types of exclusives, but worldwide exclusive means that for that season I cannot walk for anybody else in any of the cities.

WWD: How did your exclusive with Saint Laurent happen?
Holleran: I honestly don’t even know. I met with the casting director for DNA, and I guess they were showing my photos around and YSL liked me. They booked me about two or three days before the show. When they called, I was at the doctor’s office with a really bad sunburn. It was so gross, blistered and red all over my nose. The dermatologist told me it would take at least three months to clear up. I was like, “This could ruin the YSL deal.”

WWD: What did you do?
Holleran: I was taking an antibiotic that the dermatologist gave me, and using face creams and lotions over and over. The doctor told me that the last thing I should do is pick off the scabs, but I was so scared that Saint Laurent was going to release me, so I just went “pick, pick” and everything was perfect. It didn’t even look like anything happened. When I got to Paris, I told my agent here in New York about it, and he was like, “Oh my gosh, next time you need to let us know.”

WWD: What was it like backstage on the day of the show?
Holleran: I was just in awe of it all. I was also supernervous because I had never worn a long dress before and was afraid that I was going to trip on it, but Hedi [Slimane] and some of the other girls were supernice and helped me get the hang of walking in it.

WWD: Did you meet anyone exciting?
Holleran: Anna Wintour said I did a great job after the show. She came up to me and Sarah Engelland, who was also a worldwide exclusive. Sarah was getting undressed and Anna Wintour waled over and I was like, “Put back on the clothes! Put back on the clothes!” She couldn’t do it in time, so I’m like, “I’ll cover you!” Then Anna’s head is right there and she was like, “Great job, girls.” It was amazing — we both were about to faint.

WWD: Did you go to the after party?
Holleran: I went for like five minutes. I wanted to get some food, but it didn’t look very appetizing so I left. I think there were just shredded carrots. Maybe a little zucchini or something, I don’t know. I probably did miss something — they were all having fun and Hedi was socializing. I just got an orange juice and left.

WWD: How did you get your start as a model?
Holleran: Ever since I was little I wanted to model and eventually my mom was tired of me asking her. She told me I just had to get my grades up first because I wasn’t trying in school. Once the opportunity was put in front of me to model, and my mom said, ‘Get your act together,’ I got straight A’s. I went to an open call and they signed me.

WWD: What are your plans for the holidays?
Holleran: I don’t think I have any plans other than being home with the family. I have four sisters and two brothers. I’m right in the middle; my brothers are younger than me and I have one younger sister and all my other sisters are older.

WWD: Do you have to buy them all gifts?
Holleran: Oh my gosh, I hope not! I think last year I probably took some of their own stuff and wrapped it and gave it back to them.