Schurch talked to WWD about growing up in Switzerland, road-tripping across the U.S. and bringing a lobster to a nightclub. 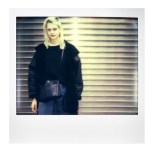 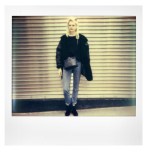 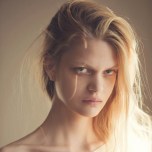 “I’m gonna dye my hair a more natural blonde today,” said Caroline Schurch, holding up an iPhone photo of Poppy Delevingne’s locks for reference. She motioned to her own coiffure, which was gelled into a punked-up version of Veronica Lake waves, with dark roots sprouting beneath. “Bleaching it like this just kills your hair.”

The half-Polish, half-Swiss model, repped by New York Model Management, has a soft-spoken, pithy demeanor. She’s also multilingual. “In Switzerland, we speak four languages,” she said. “French is my mother tongue, and I also speak Polish because my mother is from there; I used to spend a month every summer in Poland at my grandmother’s. And I speak German and English. That’s it for the moment.”

At 21, Schurch has racked up editorials in Vogue Russia, T magazine and more, with a runway pedigree that includes walking for Saint Laurent, Louis Vuitton, Maison Martin Margiela, Pringle of Scotland, Vivienne Westwood and BCBG over the past few seasons. She is currently on stay in New York’s NoLIta neighborhood until summer but plans to move here full time in September. Will her family miss her back in Switzerland? “I’m a big girl now,” she said, laughing.

Rocking beat-up vintage Levi’s, an oversize leather jacket and a Céline bag over her shoulder, Schurch talked to WWD about growing up in Switzerland, road-tripping across the U.S. and bringing a lobster to a nightclub.

WWD: How did you get discovered?
Caroline Schurch: Actually, [I was approached] for the first time when I was 14 in Paris with my mom. Some creepy guy came up to me on the street and asked me if I was interested to model. I was 14 years old, just a baby, so I was not really interested in that. Even in Switzerland, which is not a fashion country per se, I would often get approached and scouted. I finished high school at 17 and then eventually signed with an agency.

WWD: What was it like growing up in Switzerland?
C.S.: I was lucky to grow up in Switzerland, which is a paradise to grow up in. The best schools, nature…we had everything, a very wonderful childhood. I was very sporty and also into arts. My father is a doctor and my mother is a translator. I have a brother who’s 18. He’s very tall, too — much taller than me. He plays basketball. Right now, he’s doing his military service. Completely different world from what I do.

WWD: Do your parents support your modeling career?
C.S.: They really support me and I’m happy about that. In the beginning, they were a little scared. Especially my father. You know, the clichés…

WWD: Where do you live now?
C.S.: I have been in New York for one month. I’ve always dreamt about living here. I came three or four times as a tourist and rented an apartment on the Lower East Side. Now I’m renting a room at someone’s apartment in NoLIta. It’s much nicer than a model apartment, I’m very lucky — especially in NoLIta, which is the perfect location. I’m really into art; I enjoy to live so close to all those galleries [sic]. I’m up pretty early every day. When I have castings I really enjoy going to markets to buy food and discovering the real New York.

WWD: What do you do for fun here? Do you ever go out at night?
C.S.: I have a funny story about it, actually, which happened this weekend. On Friday, I had a crazy shoot with some food styling. There was food everywhere — seafood, lobsters — we had to eat [for the photos]. It was amazing. It was a three-floor apartment in TriBeCa with a pool, a crazy place. We finished pretty late and I fought to bring the lobster home with me. But at that moment, I forgot that I had to go straight to a party — a party in Chelsea for a magazine. So actually, I ended up bringing the lobster straight to the party with me. I arrived there with my lobster.

WWD: Was it in a takeout box or something?
C.S.: It was in a plastic bag. I left it in the cloak room. Yeah, I went to a club with my lobster. I didn’t have a proper dinner that day, so I went upstairs to the restaurant with my lobster there and ended up eating it around midnight.

WWD: I don’t know even know how to transition from that story.
C.S.: It was amazing, really.

WWD: How do you think your modeling experiences have changed you?
C.S.: I used to be pretty shy when I was a child, but I’m much less shy now. Especially showing my body. I don’t care anymore [about nudity]. You can’t be shy backstage, you know?

WWD: Do you ever find that there’s a competitive atmosphere backstage between all the girls?
C.S.: Yeah. There are so many girls, too many girls. The market is just…it’s crazy. You really have to be motivated if you want to be a model now. You really have to be perfect — and lucky. Lucky and motivated. I think a good sense of style can help. But also, if you’re only 16 and from the middle of nowhere in Russia and you look like you’re from [the middle of nowhere], the fashion people are sometimes [captivated], like, “Ooh wow, that’s such a new girl.” But if you’re older, maybe you come from a city and kind of already have a sense of style and you’re into fashion and you show that you’re interested…that can be better, too.

WWD: What’s the most stressful part of the show season for you?
C.S.: You never know if you’re gonna actually walk the show until the last minute, even if you’re kind of confirmed. Some girls are dropped at the very last minute. Last season, at one show, the call time was 3 a.m. and they dyed the hair of a few girls — so they had already started on hair and makeup — and then the casting director came in and said, “I’m very sorry, but the clothes are not ready” or “I’m sorry, we don’t need you anymore.” And I remember [one of the] girls didn’t walk any other shows that season….And it was the last show of the season. It was horrifying.

WWD: What are some of your goals, in modeling or otherwise?
C.S.: I hope to succeed in my job, and I would love to have a family afterward. If I could work in the fashion industry, in casting, that would be amazing. Also, I’m kind of fascinated by the U.S. I would love to go to every state and do a road trip. It’s such a huge country, so different. I would love to go to Arkansas, North Dakota, to Texas and the deep South… I love checked shirts and cowboy outfits.