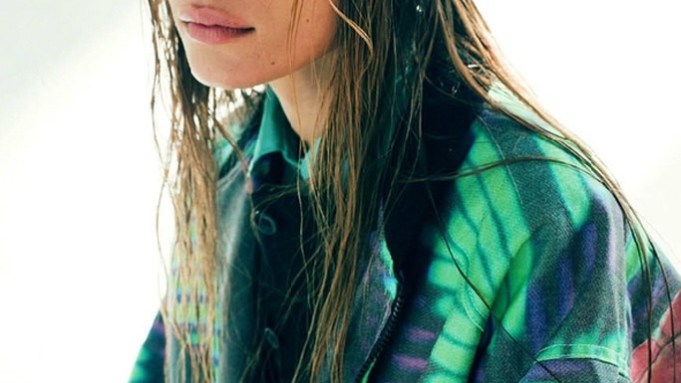 At 23 years old, Cate Underwood has mastered the professional slash — as in, model/photographer/DJ. After several years as a successful photographer in Ukraine, the Kiev native now divides her time in front of and behind the camera, all while keeping her DJ-ing “hobby” alive and well.

Underwood made the move to Bushwick, Brooklyn, just three months ago, and has no plans to slow down anytime soon. “When I came to New York during the summer, I started to work a lot and was quite busy,” Underwood says. “I was on this wave and didn’t want to lose it. I want to work as much as I can.”

Most recently, the New York Model Management-repped model has appeared in the pages of Vogue Russia and published her own “photo diary” for V Magazine during New York Fashion Week. WWD sat down with the multitalented model to talk about her new life in front of the lens.

WWD: How did you get started modeling?
Cate Underwood: I started as a photographer. I was shooting model tests in Ukraine, and a French agent was sending me the girls. I went to Paris for vacation about three years ago, and we decided to have lunch because basically we had been working together for a year and never met. So we met and he said, “Are you serious — what are you doing behind the lens?” So literally the next day, I was meeting with the biggest agencies in Paris.

WWD: Were you apprehensive about switching roles?
C.U.: When I was 16 or 17, I had a few agents try to sign me, but I used to play tennis professionally. I wasn’t that excited about the idea of modeling.

WWD: How long did you play tennis?
C.U.: Professionally, for seven years. I was playing for a German club, so I was based in Germany. I stopped due to family reasons. It was really hard, because I was playing tennis for so long and it was a huge sense of my life for so long. When I stopped, I couldn’t even watch tennis on TV. But then I started to do photography.

WWD: How did you start with photography?
C.U.: Just by shooting people in the street. It basically started like that, and I just had my pictures posted on the Internet. Someone asked if I wanted to shoot fashion, and I was already interested. I mean, I was shooting my friends in my clothes and stuff like that. So I started to shoot editorials for some magazines in Ukraine.

WWD: Have you been busy since moving to New York this summer?
C.U.: When you come to a new city, it’s not that easy to find a team. And I don’t really want to do a million pictures, which nobody will need. I prefer to do one shoot in one month, but it will be something that will be well-done and well-organized.

WWD: What is the last big project that you worked on?
C.U.: I was asked to do a self-portrait editorial by Veoir Magazine. They just launched and the editor in chief is Williams Lords, who is a really good photographer. He wanted to shoot me as a model for the issue, but I couldn’t make it because I was out of the city. So he said, “You have one week to shoot yourself. Do a self-portrait.”

WWD: How did you conceptualize the shoot?
C.U.: My boyfriend was teaching at the Rhode Island School of Design, and I thought, “I want to go see what he’s doing.” So basically, that’s how the location came up. He showed me pictures of a couple of classrooms there and I was really inspired. I basically did everything by myself — styling, makeup, hair.

WWD: Tell me about how you teamed up with V Magazine during New York Fashion Week.
C.U.: They came to me and asked to help, basically, introduce V Magazine during fashion week and cover events in a photo diary. I had worked with them for one small editorial when I first came to New York. I had Kiss makeup, so you couldn’t see my face. I’m not sure how they remembered me.…

WWD: How did you decide to take on this project, rather than walk in shows?
C.U.: I think for me, as a photographer, this was really important for my career. I don’t want to be just a model. I really need to express myself. And this was really amazing — it wasn’t even a job. I would just go around to the events after the shows. The idea of this diary was to show how it was from my point of view.

WWD: What were some of the highlights of your week?
C.U.: I was busy every day — it was really hectic. It wasn’t until afterward that I realized how amazing it all was. One of my favorite pictures is this old couple at an art gallery in Chelsea. I captured them from behind, and they are just looking at a piece, standing together so close. Those moments are most exciting to me.