Despite six years of experience, including an editorial in Vogue and multiple stints on the Marc Jacobs runway, the 20-year-old shows no hint of diva behavior. 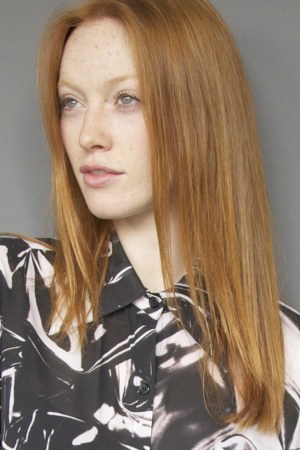 Arriving just 10 minutes past 11 a.m. — hardly late, especially by busy model standards — Chantal Stafford Abbott walks through the door gushing apologies. “I’m so sorry,” she said. “I was zoning out listening to my music and just walked in the complete opposite direction.” Despite six years of experience, including an editorial in Vogue and multiple stints on the Marc Jacobs runway, the 20-year-old shows no hint of diva behavior. Case in point: Abbott quickly deflects a compliment on her flawless complexion by offering up helpful beauty tips (she swears by jojoba oil). WWD sat down with the Marilyn-repped redhead to talk fashion week, model horror stories and party crashing.

WWD: Where are you from?
Chantal Stafford Abbott: I was born in Montreal but I grew up in the country an hour-and-a-half north. It was a super French-y town. I went to French school. It’s kind of weird because it was the complete opposite of New York — with ski-lifts, no neighbors, no nothing.

WWD: How long have you been in New York?
C.S.A.: Two-and-a-half years. I live in the Lower East Side and I’m in my second apartment now. I really like it just because it’s convenient if I have castings or if I’m meeting up with friends. My roommate is one of my best friends. We met in Montreal because we have the same agency there.

WWD: Is there ever any competition between you two?
C.S.A.: No, it’s not even a thing. I feel like every model has such a different career that it’s just hard to even compare.

WWD: You’ve already done six seasons on the runway. Are you going back for more in February?
C.S.A.: I’m going into the agency today to talk about it. The pros are that it’s really fun and you get to work with all these great people and put your face out there and be able to hopefully work with some really great designers. The downside is that it’s completely exhausting, beyond imagination. By the end, I’m always sick.

WWD: Do you remember your first big show?
C.S.A.: Marc Jacobs. I remember it was at the end of the week during my first season. I think I did his show for four seasons.

WWD: Do you have a relationship with him now?
C.S.A.: Not necessarily a relationship, but he knows my name. I guess that’s something. It’s cool to be able to work with the same designers throughout the seasons because as much as they can see you come back and grow and change, you can see them, too. It’s cool to see their creations through the seasons.

WWD: What has been the most memorable experience for you?
C.S.A.: There’s so much stuff that it’s kind of all a blur. One moment was actually not such a good one. Right after New York, all of the models and fashion people fly that night on the same plane [to London]. It’s an overnight flight and we have castings and fittings the next day so we cannot be late. We get off the plane and go straight to work. Three hours into the flight, we hear “Code red” on the speakers. No one was saying what that meant. After all of this commotion we finally realized that someone had some sort of seizure.

WWD: Was there an emergency landing?
C.S.A.: We kept on going for another hour so we’re getting close but then, all of a sudden, they’re like, “Oh sorry, we’re going to have to go back to the States because this person needs to go to a hospital.” We had to fly all the way back, which was another four hours. Then she had to get her luggage off the plane and then they had to refuel. It was so horrible.

WWD: Were you on the plane that whole time?
C.S.A.: The whole time. We were on the plane for what felt like days. I don’t remember what show I had just done, but I do remember that I had crazy makeup on and an Afro.

WWD: Do you ever read about yourself on the Internet?
C.S.A.: Sometimes, when I’m trying to find some work that I did and never saw, but I don’t go everyday to see what’s going on. I’ve never found any gossip, but when I was dating this one model — he’s anonymous — it was weird because my friends would be like, “Look at this,” and it would be people blogging about us. That was kind of weird.

WWD: Do you often date models?
C.S.A.: I’ve dated a few. My boyfriend now is in the music industry — also anonymous.

WWD: How did you meet him?
C.S.A.: On St. Patrick’s Day actually, which is kind of ironic because I’m half Irish. I met him at this random party that my friend and I saw on this balcony. We kind of crashed it in the middle of the day. So yeah, I met him there.

WWD: What jobs are coming up next for you?
C.S.A.: I really don’t know but that’s kind of my life. I don’t know what I’m going to be doing the next day so my schedule is always super last minute. I can’t say, “I can have lunch with you two days from now” because I don’t know if I can. It’s kind of hard in that sense because I don’t feel like I have control of my schedule. But at the same time, if I had a 9-to-5, I probably would be complaining a lot more.