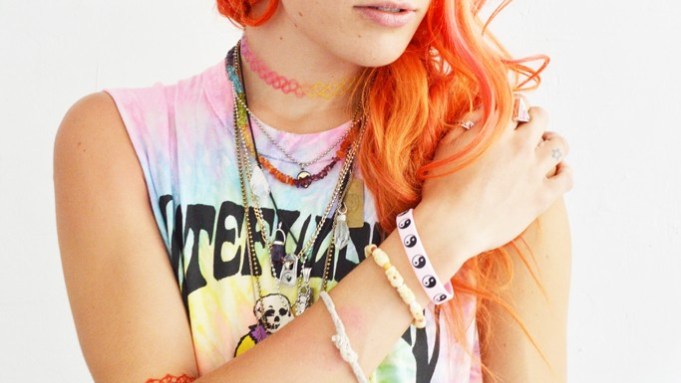 Chloe Nørgaard may look like a walking Manic Panic ad, but the One-repped model swears she’s an equal opportunist when it comes to hair dye. “It just really depends on the color I want or how bright I want it to be,” she explains. “In certain countries, you can’t get certain brands anyway, so it’s really just what I come across.” These days, Nørgaard is rocking blue and purple locks, while leading quite the nomadic lifestyle. In the past month alone, the Long Island native has traveled to Cannes, France; London; L.A., and Detroit. WWD caught up with the world traveler, who turns 23 today, during a recent pit stop in NYC. Here, Nørgaard talks hair dye, scrapbooks and a run-in with Adrien Brody.

WWD: How did your modeling career start?
Chloe Nørgaard: In middle school, I was doing acting and loved it, so I thought maybe I’d want to try out modeling. When I was in high school, I met this lady who was my mother agent for a while, but at that time, I was also really heavy into drugs and just f–king up, so nothing really came of that. I went to rehab, then graduated high-school. A year or two after that, I reconnected with that lady, and she was like, “There’s a couple of places we can go because we want to build your book before starting in New York.” We decided on Tokyo and that’s where it started.

WWD: How was that trip?
C.N.: Absolutely amazing. I tell everyone they have to go to Tokyo.

WWD: What are some of your favorite places that you’ve traveled to?
C.N.: I lived in Bondi, Australia, for three months. That was amazing because it was winter here. I would do yoga on the beach and see dolphins and drink juices and sit at cafés for hours, and then I’d Skype my parents who were like, “There’s another snowstorm [on Long Island].”

WWD: What do your parents think about modeling?
C.N.: They always support me as long as I’m behaving, in general. As long as I’m happy and respecting myself and not doing anything stupid, they’re cool with it. It takes a while to actually start making money and, of course, my dad was like, “When are you going to stop this and realize it’s not working,” or “How long are you going to keep trying this?” And I was just like, “I’m going to try it for a little bit more.” And it’s funny because I guess I started working the most when I got sick of modeling.

WWD: Why were you sick of it?
C.N.: I just felt like a mannequin Barbie. I didn’t feel like I had my personality. I was like, f–k this and dyed my hair blue. My agency at the time — I wasn’t with One then — was like, “This is not going to work. There’s no way. You’re crazy. You’ve lost your mind.” I just kept pushing and I’d set up my own shoots so that I could have stuff in my book with colored hair, and I guess it worked.

WWD: So you dyed your hair yourself?
C.N.: Yeah. I always do it myself.

WWD: How often do you dye it?
C.N.: I don’t know. I guess it changes all the time depending on how much you wash it. Sometimes I’ll add little streaks or just the ends but I’m always adding to it. Since it’s blue and purple-y now, I’ll do a blue and turquoise and then I’ll probably end up going back to greenish again. I love green. After that, I’ll probably go to orange and red again.

WWD: Is there any color you would never do?
C.N.: Brown. My natural color is brown and I have not seen that in forever. I was born blonde and as I got older it started getting brown. I started bleaching it and I haven’t really seen my natural color since.

WWD: Do you see dying your hair as the turning point in your career?
C.N.: Yeah, because it wasn’t just me dying my hair. It made me feel more myself and so I could project that and share that with the world in a way. I just felt more comfortable in my skin. It really changed my mood as well and outlook because I just felt stronger.

WWD: How does your personality help when you’re on set?
C.N.: When I’m working, I’m actually pretty quiet because I’m in work mode. I just want to make sure everything goes well. I definitely like music playing and lots of snacks. Whenever I shoot I’m eating the entire time.

WWD: What are the best on-set snacks and music?
C.N.: Oh wow. Best snacks are catering. Whenever they have a big variety of stuff and you’re just munching on stuff all day. Best music…at the Benetton campaign, they wanted it to be rock ’n’ roll and they asked me if I wanted to put on some music, so I put on Every Time I Die, which is a New York hard-core band that I grew up listening to. You could tell some of them were really freaked out by it. But they wanted me to be that character and that was how I could connect with that. But usually, deep house. Or classic rock. Or indie. Or reggae.

WWD: Let’s talk fashion week. How was it walking in the Rodarte show?
C.N.: That was super cool. [Laura and Kate Mulleavy] were super rad. I loved the outfit I was wearing, and I’m obsessed with the barbed wire jewelry they made. It was just so cool. I guess it was one of the biggest shows I ever did, so it was exciting. I love runway.

WWD: Who would be your dream designer to walk for?
C.N.: I would love to do like Prada or Chanel. Really high fashion. That would be sick.

WWD: Where is home for you these days?
C.N.: Home is my suitcase. I’m usually somewhere for two to three days. The max is like two weeks. I’m just hopping around.

WWD: Do you bring anything with you to make these short trips feel like home?
C.N.: My scrapbook.

WWD: What do you keep in there?
C.N.: Ticket stubs, like from a flight or a concert. Some notes I get from people. And then I’ll draw in it.

WWD: What’s the coolest thing you’ve put in recently?
C.N.: There were some really funny photos I took in Cannes. I was staying at a hotel in London, and I sent the concierge the pictures to print them. So, he comes to the room and he has this big smile on his face. I guess some of the photos are a little crazier than what they’re used to….

WWD: Were you in Cannes for the film festival?
C.N.: Yeah. I actually only went to see one film. We just basically ate a ton of good food there. The weather wasn’t good until the end. We just chilled.

WWD: Did you run into any movie stars?
C.N.: At one point, we were at this party and they had this buffet set up when we got there. When we were leaving, it was gone except they still had cut open watermelons, so we put them on our heads. Adrien Brody walked by and was just like, “What the f–k.”