Until recently, the 18-year-old was just another model on the rise, until The Daily Mail took issue with her size. 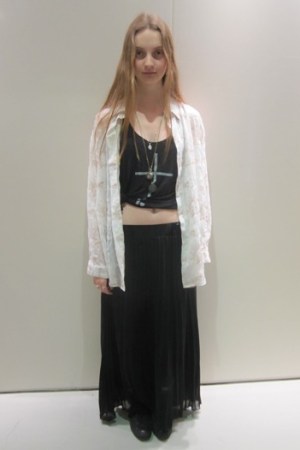 Until recently, 18-year-old Codie Young was just another model on the rise. Quickly signed on with DNA agency. Moved from Australia to New York. Walked 39 runways for fall, including Marc Jacobs, Rodarte and Chanel.

But on July 9, The Daily Mail took issue with an image of Young on Topshop’s Web site, describing the 5-foot-10 model as “skeletal,” “severely underweight” and “gaunt” and quoting multiple eating disorder specialists. The article sparked a flurry in the fashion-centric blogosphere, which in turn caused Topshop to pull the photo and replace it with a more flattering one of Young. (DNA does not disclose the weights of its models.)

Young didn’t hold back her dismay, taking to her own blog to defend herself. “I feel very hurt by the whole article and comments made by professionals,” she posted on July 11. “These supposed professionals who deal with anorexic [sic] sufferers are talking about me as if I’m not a real person (like I’m just a model used for them to prove some point) which is not the case. I am a real person with real feelings.”

WWD sat down with Young to discuss the ordeal, and, whether one believes her or not, Young’s message is clear: Pick on someone your own size.

How did you feel when you first heard about The Daily Mail article?
Well, I’ve been skinny my entire life. All my relatives on my dad’s side are tall and skinny like me, and I just happened to have that build as well. In school, I had people call me anorexic. It’s something I’ve always had to deal with. But that was like in high school. I never thought I’d have to deal with name-calling on this scale.

What made you speak up on your blog? Were you nervous that your agency might not approve?
I asked my agency first, and they said it was fine. They know I’m one of those people that doesn’t take crap from anyone. I stand up for myself. I felt I shouldn’t just sit back and have someone say something about me that’s clearly not true, so that’s why I decided to do it. I just wanted to let people know it’s not OK to just call us anorexic. I mean, obviously I understand that people are going to have opinions of me because I’m a model, but it’s different to accuse someone of having a disease.

Do you think the accusations come with the territory of being a model?
I guess, but people don’t understand that this is my job. Just because I’m a model doesn’t mean you can just attack without any sort of hesitation or any sort of facts behind it. I mean, I have a blog and I post about new restaurants I love and new gourmet food shops I find from traveling all around the world. If you look at my blog, you can tell that I love junk food.

Do you think you looked too thin in the Topshop image?
Yeah, but I just think it was a combination of being poorly Photoshopped and it was also a bad angle. I mean, that’s not what I look like. But Topshop has been really supportive about everything because they know I’m healthy.

What did your family say about it?
It was hard for them, my parents especially, because it’s that whole protective thing. They would be upset if just anyone was calling me anorexic, but it’s on such a bigger scale. It’s all over the Internet and in the news, so it was really upsetting, especially for my mom. I’m just glad I get to see her soon. I go home on Monday just until August, right before the shows. I’m really excited to use the time to recoup myself sort of. I want to do even more shows this season than last, so I need to save my energy. Maybe I’ll get a bunch of Red Bulls while I’m home.

Do you exercise?
It’s really hard, especially recently because I’ve been traveling a lot. Like I can’t sign up for a gym because I’m everywhere. That’s one thing that’s really hard for me. I don’t have to exercise because I’m naturally skinny, but if I get a chance I do like to. I quite like yoga and that type of thing, more relaxed stuff.

What’s your favorite food?
I like everything. I like to try new things. I used to be a really picky eater when I was younger, but now that I’m getting older, I like to try different things when I go to different places. That’s one thing I’ll always buy for my family, like sweets and stuff. Like I went to the Ukraine for a job recently, and I bought their traditional sweets. I like quite a lot of junk food — any kind of sweets.