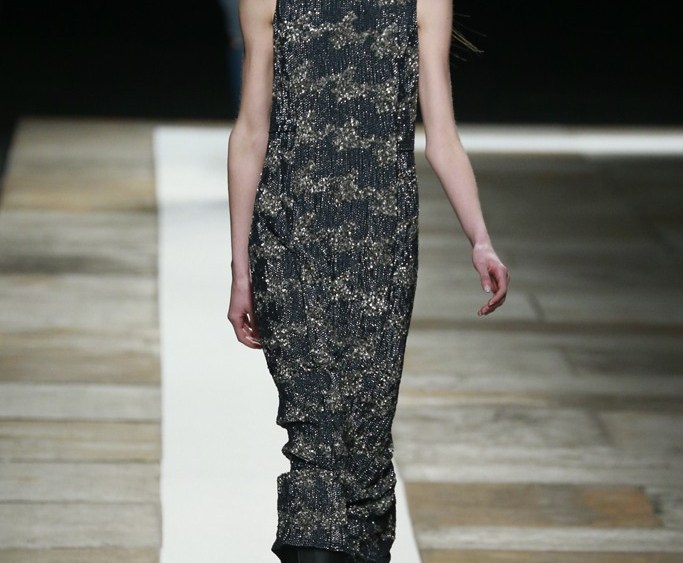 For her second season, Courtney Shallcross racked up an impressive runway résumé, walking for Theyskens’ Theory, Emporio Armani, Giorgio Armani and Comme des Garçons, among others. Still, the Pittsburgh native has her eye on a different type of runway — she’s studying to become an air-traffic controller at Pennsylvania’s Community College of Beaver County. “I actually had to get my pilot’s license for school. I didn’t get the pilot bug, but I do miss flying,” says Shallcross, 21. While some might consider walking the catwalk scarier than flying a plane, Shallcross knows better: “Flying is worse because you could die,” she says. WWD sat down with the young model, who’s now repped by The Society, to talk fashion and flying and food.

WWD: How did you start modeling?
Courtney Shallcross: I was at the airport with my brother, and we missed our connecting flight by five minutes. We were going from Pittsburgh to Charlotte and then catching a flight from Charlotte to Houston. So, we were stuck in Charlotte, just waiting around the terminal for a few hours, and I met my mother agent there.

WWD: Were you suspicious that it might be a scam?
C.S.: Yeah, because all the stuff in the past has been like, “Come model with us and pay $500 to develop your book.” But, this agent was like, “Come to Nashville and I shoot everything for free.” My mom is a flight attendant, so I get to fly for free. It literally cost me nothing.

WWD: Is your mom the one who sparked your interest in aviation?
C.S.: Yeah. First of all, I really like the free flight benefits. On my 24th birthday, they go away. That will be a sad birthday. But then my uncle is an air-traffic controller, another uncle who is a pilot, an aunt who is a flight attendant and my younger brother is the one who convinced me to go to school for air-traffic control.

WWD: What was your first modeling job?
C.S.: I guess it would have been [spring 2013] fashion week. My first runway show was Billy Reid. It was my first runway show ever. It was so cool because I was the opening girl and then I closed it, too.

WWD: Did you know that was a big deal?
C.S.: My mother agent helps me a lot. She’ll call me freaking out and that’s how I know. When you get the frantic phone call, you know.

WWD: How did this season compare to your debut in September?
C.S.: I found it to be a lot easier, just because I knew what I was getting myself into. I knew the process and the people. Just having friends makes a huge difference.

WWD: You changed agencies right before Fashion Week. Why?
C.S.: I had heard good things about The Society, and I knew the bookers there and I really liked them. I saw the opportunity and jumped on it. I’m so glad I did. Did you see the comp cards? It’s like Lindsey Wixson and me. Never in a million years did I think I would be in the same category.

WWD: What were some of your favorite shows that you’ve walked?
C.S.: Well last season, I did Louis Vuitton and that was like a production. I did Marc Jacobs as well. It was weird, at Louis Vuitton, I was like, “Why is Marc Jacobs calling me by my first name?” First-name basis, making small talk with him by the food table. That was nice because it set me up for other shows — it was like the golden ticket.

WWD: Did you have any expectations going into this season?
C.S.: I didn’t expect to get Marc or Louis Vuitton again, but I had a feeling I would be doing quality shows. Quality versus quantity — do you know what I mean? For example, I loved Reem Acra. I loved the outfits I was wearing. The first one was this big, black feathery thing. I felt like a super villain. Then, my second look was a sleek gown. It was fun to dress up.

WWD: What is your go-to fashion-month essential?
C.S. Snacks. I always pack a lunch, which is usually a turkey sandwich and an apple. I’ve been known to scavenge at shows — it’s my grocery shopping! At both of the Armani shows, they had a lot of fruit backstage. My bag was so heavy when I left.