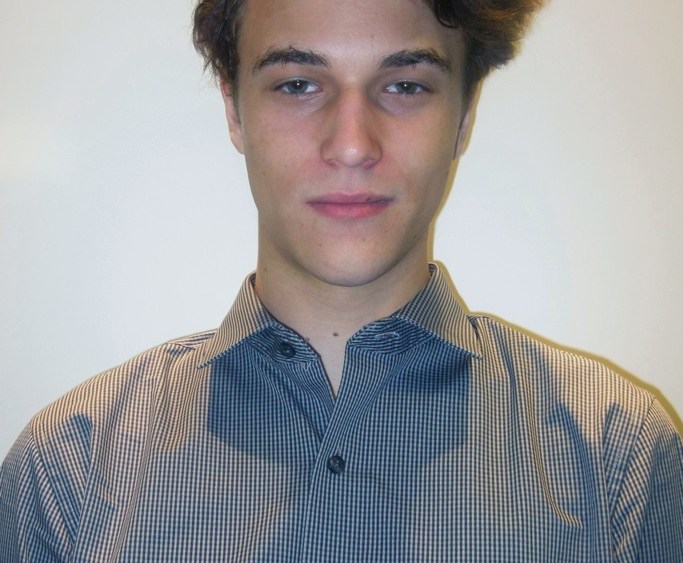 It’s conventional wisdom that blue hair will get you noticed. Fortuitously, the right person noticed Dallas Alberti. “I was at my barber on Astor Place, sitting under one of those heat machine things with foils in and my blue hair sticking out all over the place,” Alberti, 18, says. Though that may not be the most flattering look, Alberti caught the eye of a fellow male model in the seat next to him. “He said, ‘What agency are you with?’ And I was like, ‘What? Like CIA? FBI?’” After some clarification, the model-cum-scout hooked Alberti up with a meeting with Red Model Management. Four months later, the Manhattan native is ready for the big leagues.

So what prompted the blue dye job in the first place?
Dallas Alberti: It was just kind of a random idea. No real impetus. But when I started going outside of New York, I’d visit friends at school and go to these frat houses and they were just staring at it. That’s why I have to reevaluate my wardrobe before I go to school.

You’re heading into your sophomore year at SUNY Binghamton. Were you hesitant to get into modeling with college on your plate?
D.A.: At first I thought of it as a summer job, to be honest, because I’m in school. I just thought it’s better than working at like TGI Fridays. I was doing retail at Aéropostale before, just walking around folding clothes for six to eight hours so I thought this could be fun and different.

Were you nervous being in front of the camera when you first started doing shoots?
D.A.: Yeah, it’s gotten easier though. At my first castings, my legs would be trembling. I had to be like, “Three, two, one, hold it together.” But, like I said, you gain confidence the more you do it. Also, once you put something really nice on, there’s something that clicks. Like when you wear a superexpensive suit and you think, I’m never going to get to wear this ever again but I am now and it’s pretty swag.

Are you planning to do some New York Fashion Week shows in September?
D.A.: I’ve never done a show but I can walk. Going to casting after casting, eventually you know what they want. Like such a New Yorker, I’m usually walking down the street with somewhere I’ve got to be and if it’s a crowded street I’ll get annoyed. People tell me I always have a pissed look on my face when I’m walking so maybe that will help.