With her bleached crop and thrifted duds, the 17-year-old Charleston, S.C. native fits right into her new Manhattan digs. 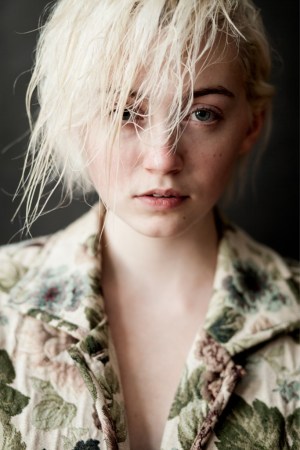 Some models spend their downtime shopping in SoHo or kicking back at the Top of the Standard but Gabrielle Blevins has her own idea of fun. “I have a yearly pass to the zoo,” says the Major-repped model. “I go pretty often, especially when it’s good weather.”

With her bleached crop and thrifted duds, the Charleston, S.C. native fits right into her new Manhattan digs, despite arriving just three months ago. WWD sat down with the 17-year-old to chat about her plans for model domination.

WWD: How did you get started modeling?
Gabrielle Blevins: I just sort of fell into it, being tall and awkward. I was kind of like, “Dad, I think I want to be a model,” and he said OK. All of my friends are applying to college, but modeling right now is full time for me. I just want to be a big model, you know?

WWD: Are there any models that you look up to?
G.B.: Cara Delevingne is really big right now. I just want people to see my face and be like, “Oh, that’s Gabrielle Blevins.” Like Lindsey Wixson, or any of those girls where people who aren’t even in fashion know who they are.

WWD: What New York Fashion Week shows did you walk in?
G.B.: I did Chris Benz, which was fun. He is like a pink-haired angel. I love him. He actually showed at Charleston Fashion Week last year and I was supposed to be in his presentation but because I was in something else, I couldn’t do it. This year, I walked in and was like, “I was supposed to be in your show.” So, it worked out. Then I also did Rachel Antonoff.

WWD: Did you see Lena Dunham at that presentation?
G.B.: Yes. I was like, “Oh my god, I’m such a big fan, can I have a picture?” So I have a selfie picture on my cell phone. It’s the worst picture of both of us, but I sent it to all of my friends. I ran into a bunch of people — Joan Rivers touched me, actually. She said, “Sorry for touching your skirt.” I was like, “No, Joan Rivers, go ahead!”

WWD: What have you been up to since fashion week ended?
G.B.: I’ve been doing lots of castings and a good amount of print editorials for small magazines. I’m actually the face of Fatboy hair putty, which is a brand started by a guy who works at Cutler in SoHo. He’s been cutting my hair for years — I would come to New York just to get my hair cut so we’ve become good friends. In the photos, my hair is everywhere because it’s showing what the putty can do. It pretty much defies gravity.

WWD: What do you like to do when you aren’t working?
G.B.: I’m in the process of trying to make an indie zine. It’s going to be some fashion stuff, movies, music — everything. I just finished the playlist, and every song has the word love in the title. So, like, “Friday, I’m in Love” by the Cure. It’s mostly me working on it, but some of my friends from home are writers and they’re very stylish girls. I think I’ll do one of those Kickstarter campaigns to publish it.