Her close-cropped coif may be deceiving, but the 21-year-old Sudanese model is a full-blown girly girl. 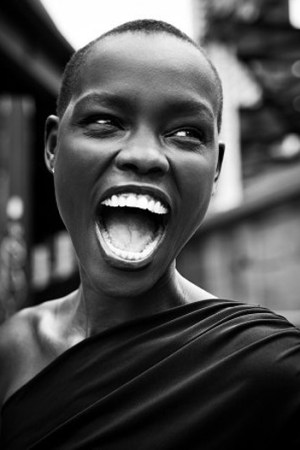 Her close-cropped coif may be deceiving, but Grace Bol is a full-blown girly girl. “I’d much rather be in a beautiful gown than jeans and a T-shirt,” says the 21-year-old Sudanese model, who’s repped by Major. And lucky for her, that’s just what she’s been wearing lately, having appeared in the fall shows of L’Wren Scott, Givenchy, Vivienne Westwood and Tracy Reese. The 5-foot-10 Bol moved to the States with her family as a child and was discovered in a mall in Kansas City when she was 19. Her favorite part of modeling so far? “Having my makeup done backstage,” she says. Girly girl, indeed.

Was fall 2011 your first fashion week?
Yeah, when I first started I did a couple of shows but this season was the first time I actually did the full round of castings and shows.

What were your first impressions?
I didn’t know how many castings there were. I was running around a lot. You’ve got to prepare for it: work out, get your shape on. Also, you’ve got to have sneakers in your purse. It’s a must! The casting part was crazy but definitely worth it, because at the end of the day, I just love doing shows. I love the fact that everybody’s waiting for me.

Is that your favorite part of it, that moment before you hit the runway?
I love that, but my favorite part is when I’m backstage having my makeup done. I can’t do any of that stuff myself, so I think it’s amazing how they can transform my face. Also, the fact that I get to be the first person to wear the outfit before anyone else in the world is pretty cool. It’s funny when you see it on someone else later and you’re like, “You have my dress!”

Is having such short hair an added bonus while backstage?
Yes, I’m very fast. Most of the time, I ask, “What are you going to do with my hair?” and they just laugh. I never get it done. But it’s great because sometimes I can do more shows in one day because they never waste time on my hair.

So far, what has been the highlight of your career?
Just the fact that I went to Paris this past season. I did well here in New York, but I wasn’t expecting to do any shows in Paris at all, but then I got Givenchy and I was thrilled. I could retire today and truly claim that I was a real model. I mean, I did Givenchy. That’s when you know you’ve really made it.

What do you like to do when you’re not working?
I usually cook for my friends and work out. I would love to play basketball but I haven’t seen any basketball courts in New York that aren’t full of shirtless guys. I don’t want to play with them, so mostly I play with my brothers when I go back home.

You moved to Kansas City from Sudan when you were young, right?
Half of my family was in the States already. I have five sisters and seven brothers altogether, so it took us a while to all get here. First we moved to Arizona when I was six, then we went to Kansas City.

Have you been back to Sudan since you left?
Yes, I went two years ago. It was bad and good, but more bad than good. There were times when I was like, What? This is my country. This is not how I thought people lived. And it would really break my heart. I saw some of the girls I used to play with and now they’re married and have children. They couldn’t believe I wasn’t married. The beauty of it is that I don’t have to. They have to because that’s their culture. Eventually, I really want to go back and help because I believe we have beautiful girls in my country. Who knows? Maybe I’ll become a designer and they will all walk in my show.