Racking up countless editorials and campaigns over the past six years, the 28-year-old Brazil native has lots to share. 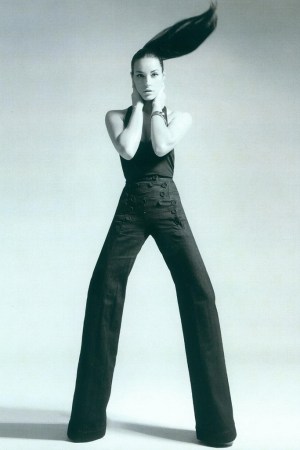 For someone who was just stuck underground in a crowded subway car for 30 minutes, Gracileia Souza is in high spirits. The Brazil native shrugs off the delay as a routine peril of mass transit (“It happens,” she said) before quickly turning the conversation to her recent nuptials. “I’m excited to call someone my husband,” the Trump model says of Scott Morrison, a designer for 3×1 Denim, from Palm Springs, Calif. Of course, the free jeans don’t hurt. “That’s the best part,” Souza riffs. Racking up countless editorials (Glamour, Elle, Spanish Vogue) and campaigns (Pantene, Wella, Maybelline) over the past six years, the 28-year-old has lots to share. Here, she dishes on her most memorable modeling moments.

WWD: Do you remember your first big campaign?
Gracileia Souza: The first campaign, oh my God. I don’t think it exists anymore. It was a clothing line. There was a billboard in Times Square. That was exciting because it was one of my first jobs. People just started saying, “I see you in Times Square.” My booker didn’t tell me it was going up.

WWD: When did you start modeling?
G.S.: About six years ago. I came to Boston for an exchange program. A lot of the international students do that. A scouter from New York stopped me on the street and said, “You should be a model.” It was during summer break from school, so I could actually go to New York and check it out. I did it for a little and went back to Brazil. Then I did more traveling and lived in Europe, Asia, everywhere.”

WWD: Where was your favorite place to live?
G.S.: I loved Thailand. I was there for six months. It’s so nice and peaceful. The people are great. There were a lot of German clients that go to Thailand because it’s cheaper to shoot there.

WWD: Have you ever done any runway?
G.S.: Yes, when I was younger. I don’t remember which ones I did, but I did quite a few. In the beginning, I wasn’t in the fashion world. I didn’t know this brand or that brand. I was from Brazil!

WWD: Do you ever thing about going back to runway?
G.S.: No. I think they like skinnier and young girls, which is OK. It’s great when you start. It teaches you fashion so you learn and see all the designers. And you meet Calvin Klein and you’re like “Oh my God, that’s Calvin Klein.” But back then, I had to learn all this because I never knew who Calvin Klein was. So you just learn. And now I love doing print.

WWD: What was your most memorable shoot?
G.S.: My favorite place to shoot is the Pink Sands resort in Harbour Island [in the Bahamas]. Lots of clients shoot there because it’s so close. I even shot a towel catalogue there. When my booker called and told me, I was like, “What am I supposed to do with a towel?” Really, all I had to do was walk around with towels in my hands. But it was fun.