Now 19 years old and signed with Trump Models, Noble has been keeping busy with editorials in Harper’s Bazaar U.K., Wonderland and Love. 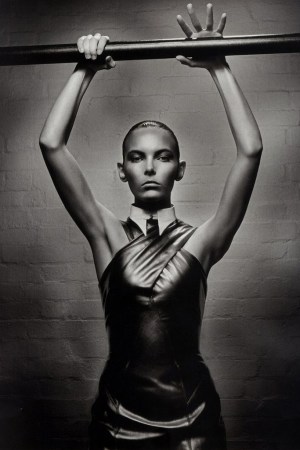 When she was 16, Hannah Noble was discovered while hanging out at a local mall near her hometown of Stratford-Upon-Avon, England. Six months later, she was stomping down Prada’s spring 2011 runway. Now 19 years old and signed with Trump Models in New York, Noble can’t help but wonder what life would be like if she had skipped that serendipitous shopping trip. “I wanted to be an accountant,” says the 5-foot, 9.5-inch brunette. “Looking back on it now, I’m like, ‘Thank God it didn’t carry on!’” CPA dreams discarded, Noble has been keeping busy with editorials in Harper’s Bazaar U.K., Wonderland and Love. Here, she fills WWD in on her “overwhelming” career.

WWD: Tell us about your breakthrough moment as a Prada exclusive.
Hannah Noble: It was definitely…I can’t find words to describe. I enjoyed it more than I thought I would. I felt sort of out of place at the time, surrounded by all these models. The moment that I saw Freja [Beha Erichsen] was when it kicked in that I was really there. I think the whole experience was just overwhelming.

WWD: Do you still find modeling overwhelming?
H.N.: I think that was just a gradual process, but still now I get these moments.

WWD: What is the most challenging part of your job?
H.N.: Shoots where I have to smile. Not that I don’t like smiling, but I think it’s really hard to smile when you don’t mean it. It’s the acting side of modeling. One of the bookers from my mother agency said to imagine the photographer on the toilet.

WWD: What has been your favorite editorial shoot to date?
H.N.: I think one of my favorites was Love magazine. It was a sailing story I did with Boo George last year. We were out on location in Kent. It was just a really fun day because we had a little pier to ourselves and an old boathouse, and we were on a little ship. The whole experience was great fun.

WWD: What do you do to keep yourself motivated on set?
H.N.: I suppose just look forward to that moment when everyone goes, “It’s a wrap!” It’s funny how happy everyone’s faces become when the shoot’s over.

WWD: Where are some of the coolest places that you’ve traveled since becoming a model?
H.N.: I love Japan. I think it’s been the experience that’s changed me as a person the most out of everywhere that I’ve traveled. I think it just gave me a big life-check. I was so free that I had to control myself in a way that’s helped me to sort of ground myself. And the best concert I’ve been to was in Japan, for a band called It’s A Musical. It was such an intimate concert, yet the music was so good.

WWD: Are you a big music fan?
H.N.: Yeah. Massive Attack is one of my favorite artists. This isn’t exactly my genre of music, but I went to see Andy C, who is a drum-and-bass DJ, a couple of weeks ago in Levington, which is near my hometown. It was like a rave party. There was definitely some crazy dancing going on. Yeah, that was a new experience.