The 25-year-old modeling veteran spoke with WWD about how she got her start and what’s to come. 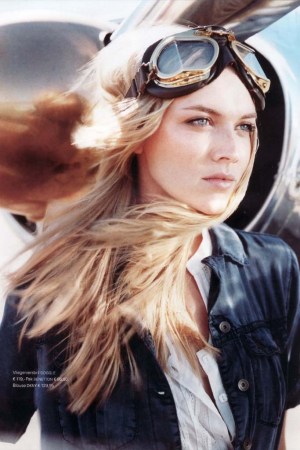 Heather Hahn has walked for Chanel, posed in Vogue and even had a cameo on Entourage. There’s not much that fazes the 25-year-old modeling veteran — unless you count a certain comedian. “Patton Oswalt was on my flight once and I was like, ‘Oh my god, that’s Patton,’” says the Trump-repped model. “My favorite movie of all time is ‘Ratatouille’ and he’s the voice in it. I actually was too nervous to say hi. I just kept looking at him, and he kept looking at me. I think I was creeping him out.” After an extended stint in Los Angeles, the Spokane, Wash., native is back in New York and ready to relaunch her modeling career. She spoke with WWD about how she got her start and what’s to come.

WWD: What was it like to start modeling as a 13 year old?
Heather Hahn: You know what? So many people ask me this and it’s kind of just my survival instincts kicked in, so I did what I was told. My first official trip was when I was 13 going on 14 and I went to Tokyo for about four months. I wasn’t naïve — I knew what was going on. I had a chaperone and a translator so it wasn’t that bad, but it really instilled an amazing work ethic in me.

WWD: What were you doing in Tokyo?
H.H.: Oh gosh, my first magazine that I ever shot was for Elle Japan, and it was really cool — it was a paper cutout doll, and it popped up. So it was me in Dior lingerie and it had different outfits you could put on it. I got to keep it, and it’s kind of a memento.

WWD: What did your friends think when they saw it?
H.H.: I kind of kept modeling a secret for a while, because my town is really small and bullying seems to be a factor. A lot of people thought I was lying because in Spokane, no one knows what’s going on in fashion. I had a magazine come out, I think it was Teen Vogue, and it was my first American magazine, and that’s when everyone found out that I was actually modeling, and it was horrible. My house got egged and toilet-papered.

WWD: When you first went to Tokyo, where did you tell them you were going?
H.H.: I only told my innermost friends; I told my four girlfriends I was going to Tokyo to model. I just told everyone else that I was going to my grandparents’ house, I think.

WWD: What were some of the jobs you were doing in Paris?
H.H.: My first runway show I ever did was for Chanel at couture in Paris. I was a baby. I had no idea who Karl Lagerfeld was, absolutely no idea. So I walk in and they start fitting on me and I was just like, “Hi, how are you!” We just started talking. It was just a full conversation and I was like, “Well, it was great to meet you!” And then I left the casting and like 20 minutes later, my agent called me and was like, “Karl Lagerfeld just confirmed the Chanel show.” And I’m like, “who’s Karl Lagerfeld?” And they’re like, “Karl Lagerfeld’s the designer for Chanel!” And then I told them the story and they were like, “Oh my God.”

WWD: How did your career change after doing that show?
H.H.: I was full-time in New York for four years. When I first got here I did a Theory campaign. I shot for Victoria’s Secret Pink. I did lot of magazines as well, including Vogue. Then, my career [became] more commercial because I have a very commercial look, but a high-fashion body. When I moved to L.A., it was extremely commercial.

WWD: How did you start acting when you got to L.A.?
H.H.: I did this movie, “Bruno.” The producers came to different agencies and were like, “We’re doing this fashion documentary and we’re looking for a model to play this part.”

WWD: They told you it was a fashion documentary?
H.H.: Yeah, they said it was a fashion documentary, and so they did mass models, they saw like 500 or 1,000 girls. I auditioned again and did a screen test and I think they picked me because I had no idea who Sacha Baron Cohen was and I’d never seen “Borat.” They gave like guidelines and were like, “OK, this is what we’re going to talk about and this is the idea of it,” and so it was a lot of improv.

[Sacha] never broke character, even when the cameras weren’t rolling. It was kind of obvious something’s up, it was so over-the-top, but when you’re in Paris and London, you see people like that, so I kind of second-guessed myself.

WWD: When did you find out that it was a hoax?
H.H.: I was working in London and I got a call from my agent. She was like, “Did you do a movie and not tell us?” And I’m like, “What are you talking about?” And she said, “Bruno.” I’d seen ads for it, but I had no idea. And my agent said, “Well, you’re in the movie, it premiered last night in London and we’ve had like 15 magazines and  newspapers call that want to interview you.” And I was like, “Are you serious?!”

WWD: What was your reaction?
H.H.: I got a lot of flack from the fashion industry, because they thought I was very stupid. So, I guess I played the role well….I actually saw Sacha at my friend’s birthday party in L.A., and he came up to me and said, “You know, if anything bad happened to you, I’m really sorry.” He was really very sweet.

WWD: Do you have anything in the works now, acting-wise?
H.H.: A TV Show, “Hello Ladies.” It was bought by HBO for the whole season, and we start filming in September. My friend Stephen Merchant wrote this character and put me in it. Modeling is my main focus right now, though; it’s my career. Lately, I’ve hit a point in my life where I’m just very inspired and I want to be in fashion and I want to be involved with it. I’ve become excited about modeling again. It’s really good.

WWD: Has it been hard to pick up modeling again?
H.H.: We’ve been putting my book together, and getting me established. It’s tiring, but in a good way. It’s a good tired. Being in L.A. for so long, it’s so low-key and so laid-back. I’m just so excited to be [in New York] in the hustle. I’m just at a different point in my life, too, because I took time off to focus on my personal self. I’m just in a completely different state of mind, and I feel like it’s the optimum time for me to be in New York.