The 26-year-old Canadian model, known for her big eyes and doll-like appearance, got her start in the early Aughts, booking every show from Givenchy to Chanel. 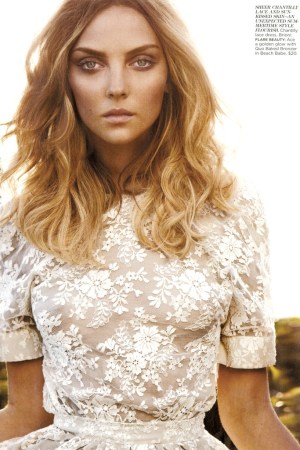 Heather Marks, at this point in her career, has become a recognizable face. And no wonder: the 5-foot, 11-inch Canadian model — arguably a cross between Gemma Ward and actress Anna Faris, and known for her big, blue eyes and doll-like appearance — got her start in the early Aughts, booking every runway show from Givenchy to Marc Jacobs to Chanel. There were also all the campaigns — Dolce & Gabbana, Giorgio Armani, Jimmy Choo, Revlon, Nars and Anna Sui, among them — and the magazine covers, most recently for Elle Russia.

Now 26 and repped by Women Management, Marks, who lives in New York City, has been immersed in a major modeling career for almost half of her life. Though she was initially reluctant to try modeling and describes her pre-modeling years as awkward, sporty and tomboyish, she eventually jumped on the opportunity (with a gentle nudge from her parents) and never looked back. “Once it happens, you either gotta do it or not,” she said on a recent afternoon in Bryant Park. “There’s no in the middle.”

Despite all that, Marks claims she was relatively naïve during those first few whirlwind years of her career, not fully grasping the gravity of the brands and people she was working with. “When I look back on it now, I’m like, ‘Wow,’” she reflected. “But maybe that was a good thing, because it never put too much pressure on me.”

WWD: How did you start modeling?
Heather Marks: I was scouted when I was 12 years old. Crazy! I was a baby. I was at a convention center for The Calgary Women’s Show…It was a big shopping event in Canada. My mom took me for the afternoon and an agent came up to me and said, “We’re doing a model search, can you enter?” I was very shy — a tomboy. My mom was like, “Yes, she will!” I was mortified. So I entered this competition and they made us walk down the runway. I won the grand prize. I was 12 years old, so it didn’t really mean anything. But that got me started with the agency.

WWD: You were so young. How did your career take off from there?
H.M.: I got a couple test shoots in, but I was too young to model, so they hired me to do some filing [and clerical] work at the agency. It was a dream job when you’re 12 or 13 years old. I think it was the agent’s way of showing me, “Look! This is what the girls do. They make lots of money.” I had that job until I was 14 or so, and then I got booked on one of my first jobs. My braces came off and I got booked for a Canadian magazine called Flare. Right after that, I came to New York.

WWD: Were you able to finish high school?
H.M.: Things got crazy over the summer before high school. I enrolled at a “do-it-at-your-own-pace” high school…but I only lasted a few days. My parents sat down with me and said, “Let’s try online schooling.” I tried that for a few months, too, but it was a struggle. I was shooting every day, and then I’d be up till 3 a.m. doing homework. My parents sat me down and gave me an ultimatum. They were like, “It’s totally your choice: You either model or you go to school. You can’t do both.” I feel like most parents wouldn’t do that, but they were like, “School will always be there.” So I never went back. I still have dreams of finishing. But while I was upset that I wasn’t in school with my friends, I was still learning a lot. My street smarts were great. You’re forced to mature really fast because you’re working with people who could be your parents.

WWD: Growing up, had you ever envisioned yourself as a model?
H.M.: No, no. I was this weird tomboy with short hair. When you’re that young, you’re so tall with big feet.…I was very awkward. It took me a long time to grow into my body. My mom’s friends would mention it, “You should model, you’re so tall.” But even when I was scouted, it was not anything I wanted to do. I wanted to play soccer.

WWD: Was there ever a moment where you’d felt like you’d made it?
H.M.: It’s funny, because one of the first big shows I ever walked was Chanel couture with Karolina Kurkova, Gisele Bündchen, all of them. I also did all of Chanel’s looks and press and I was barely 15. I was working with Karl [Lagerfeld] every day. The whole team was amazing. I think it was very surreal. But I don’t even think I knew [how big of a deal that was at the time]. It started to really hit me that year — that was a really big year for me. I was doing Italian Vogue, but back then, I was like, “What’s Italian Vogue?” Then, of course, when I booked Teen Vogue, that was exciting. When friends from back home would see my work, it would feel more [significant].

WWD: You still walk a few runway shows here and there, I noticed.
H.M.: I love to do one show [in a season] and make it special. That’s fun for me. I was doing like, 98 shows per season when I was 15 and 16 — for like three or four seasons in a row. I think, back then, every girl walked every show. It was a tribe of us, and the other major girls were probably all doing the same amount as me. Imagine your hair and makeup being done 98 times. It was a lot. After I transitioned out of runway, it was so much fun for me to come back later and do a couple of shows. It brings the joy back.

WWD: You’re still booking major editorials; you were just on the cover of Elle Russia.
H.M.: I definitely prefer editorial now. I love being on the runway and the excitement, but with an editorial, there’s a creative aspect where you get involved and you become this character. You’re working with a team.…You get to meet people. I like that. It’s very social. In a show, it’s like, you’re like one in 30 people.

WWD: What’s your life like now?
H.M.: I live in the East Village. I bought an apartment seven years ago.…I never considered New York home before that. I’m active. In the winter I love to snowboard. In the summer, I have a house on a lake in British Colombia. I usually go back for a month or two every summer. I have a boat out there and I’m a big wakeboarder and surfer. I like hiking. I like to be outdoors.

WWD: You were in a movie back in 2012. What was that like? Is acting still a pursuit of yours?
H.M.: It was fun. It was a very last-minute thing. I got a call and the next day, I was on a plane to Toronto to film this horror movie. It was a crazy experience; I was so out of my element. It pushed me to the limit in a good way. [In the scene] they had me wrapped in a cocoon from the ceiling, and I had to scream because someone was attacking me. The director came up to me and was like, “I didn’t believe a thing you just did.” I’m good at modeling, but then you get into acting, and it’s a whole different thing. After a few takes, I got more comfortable. You have to be unaware of everyone around you — you just have to be crazy. I took some acting classes, which were crazy, too. It’s not something I’m actively pursuing, but it’s definitely something I’d be open to.

WWD: Have you noticed changes in the modeling industry over the course of your career?
H.M.: There are definitely lots of changes, from fashion and style to models. We’ve been through stages where there were really thin young girls, to beautiful, sexy, curvy girls. Change is always good. Where the industry is at right now is awesome — there’s such a great mix.

WWD: Were there ever girls you looked up to in the business?
H.M.: There are so many. I’ve always loved Daria [Werbowy] because she’s awesome, she’s Canadian, she’s sporty, too — she snowboards. And Kate Moss, of course — the best style icon.

WWD: What advice would you give to a young girl just starting out?
H.M.: I think the biggest thing is to not take it seriously. When you’re that young, if you put your hopes so high, you can only be let down. You’re never gonna be perfect for every job. You have to be able to handle rejection. You can’t take it personally. I’ve always taken it as it comes. And as you get older, it becomes harder. But at the end of the day, if you’re not the right person for it, it doesn’t mean they don’t like you. They might just want dark hair or something. Some people will say to me, “It must be so competitive between girls.” But, at least with my era of girls, we’re all still friends. We’re all very supportive of each other.

WWD: What’s your outlook for the future?
H.M.: I’m starting my Pilates certification in my spare time. I’m at a stage where I’m starting to pick up different hobbies, but I would never have time to have another job. I feel fortunate just to still be working and want to see how far it goes. I don’t know if I’ll stay in the industry, but once you’re in it, you’re kind of in it. It would be hard to get up and walk away.