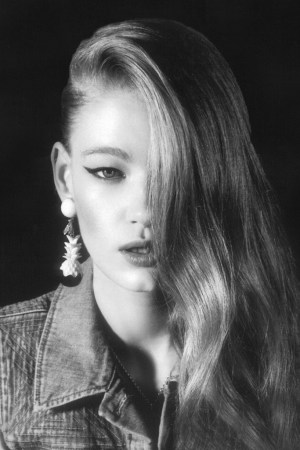 Chatting with Hollie May Saker is like cracking open the latest teen magazine — full of bubbly personality and ready to debate the cutest member of One Direction (in Hollie’s case, it’s Louis). But with recent editorials in Love and British Vogue, the 18-year-old Brit now has much more in common with high-fashion titles. And while her spring runway lineup included shows like Miu Miu, Versace and Burberry, the Trump-repped redhead says she’s trying to maintain a normal life — and a long-distance relationship.

“It’s hard for my boyfriend,” says Saker. “I want to have him with me and show him all these things. He’s such a lad. I brought him to the Vivienne Westwood show I did and he just stands out. Afterward, he came up to me and said, ‘Did you see that crazy ginger lady that ran on the catwalk?’ I was like, ‘That’s Vivienne Westwood.’”

WWD: How did you begin modeling?
Hollie May Saker: It’s a bit complicated. My boyfriend’s grandmother asked if I did modeling and that she knew someone from Models 1 in London. The only time I’ve ever heard of Models 1 was through “Britain’s Next Top Model.” So this booker came to see me and really liked me, though I don’t know why.

WWD: How are you feeling after you walked such an amazing season?
H.M.S.: I’m so happy with everything that has happened. There’s not another show I could’ve gotten that would’ve topped it. Everything I did was amazing, especially Burberry. That was my goal in modeling since I started. I’ve got my goal now.

WWD: How did you find out that you had booked Burberry?
H.M.S.: I found out two days before, with my mom. She loves McDonald’s and they do this chicken thing that you can only get in England. So, we were in McDonald’s when I got the call. I just started crying and my mom’s like “What’s happened?” I told her and she threw the tray of food and just started screaming. Then, it got worse. We went outside and were walking down Oxford Street, and to anyone with anything Burberry — like this lady had a Burberry umbrella — she screams, “My daughter’s walking for them tomorrow!” I had to tell her, “Mom, please stop, please!”

WWD: What was it like actually walking in the show?
H.M.S.: I couldn’t believe it. In the finale, I had glasses on, thank God. My tears just started streaming. It was so much. It didn’t feel real. I was walking past Harry Styles, Paloma Faith, all these incredible people. I’m walking in the show for them. I’m showing clothes to them. It was crazy.

WWD: Your first ever show was Marc Jacobs, last September. Tell me about that.
H.M.S.: I cried. As soon as I got told, I started crying. I didn’t get cast [in February], but I got it again this season. I thought, “I’m 18 now, I can handle this.” I cried again. In the same spot. I was away from Marc, thank God, but just crying to the people who are pinning me in. They’re all like “Oh, we remember you doing this two years ago. We thought you’ve grown up.”

WWD: How did this show compare to your last Marc show?
H.M.S.: I felt last time I did it that I was this new girl. I just sat in the corner with my booker. This time, I was with the girls. I was with Georgia May [Jagger]. I was enjoying the show atmosphere. I wasn’t in the corner waiting for it to happen. The show just comes a lot easier because you’re not sitting worrying about it. The set was beyond amazing. It’s incredible what he does. Every year is mind-blowing and to be a part of it, you feel like you are in a movie. He could just design the outfits and send them out but he doesn’t. He makes the whole show connected to the outfits. They’re almost like costumes.

WWD: And what about Chanel?
H.M.S.: It was incredible. As soon as I got off the runway, I had three dressers come up to me and start fanning my eyes because I was about to start crying. I had to pull myself together. Karl was like two inches from me and I didn’t want to start crying, but I had just walked for Chanel. I kept my cool until after the finale and then I cried like a clown.

WWD: What have been some of your most star-struck moments?
H.M.S.: The day before Versace, we did a run-through thing with a few of the girls, and then they were telling us that there was going to be a guest watching. I was a little bit late to the rehearsal and hadn’t eaten, so I had one piece of pizza in mouth, the pizza box in my hands and a Diet Coke. I open the car door and Kate Moss walks past me. I dropped everything. Pizza came out of my mouth and went on my shoes. She’s amazing, she’s my idol. If I ever got to meet her properly, I don’t know what I would say. Then, the other week there was a Chloé show in L.A. and Chace Crawford was hitting on me. I was like “Is this serious?” He was like touching my leg and stuff. I was like, “This is not meant to happen. I’m not Serena.” I’ve watched ‘Gossip Girl’ through and through, and then to be at party with him standing next to me and saying he likes my accent.…I mean, he’s got selfies of us on his phone.

WWD: A lot of blogs are calling you “The next Cara Delevingne.” How does that make you feel?
H.M.S.: She used to be my idol. Now she’s my friend. We speak almost once a week. It’s weird to be grouped with her because she’s already done everything. I would love to be as successful as her. She really smashed it.

WWD: Do you ever read any false rumors about yourself online?
H.M.S.: I’ve read one that says, “With an interview with Hollie,” and it’s not even things that I’ve said and they reworded, but I never said them at all. Someone’s done a false interview, saying things like, “I would bring my mom with me but why would I spend money on flights for her when I can buy clothes?” That’s not me. I’ve commented on it like, “I’m Hollie-Mae Saker and I’ve never said those things.”

WWD: You received a lot of press after the Nina Ricci show this season when a topless protestor interrupted your walk.
H.M.S.: That was a bit mental. That got out of hand as well because the only interview I did was with my hometown newspaper in Liverpool. My words were “I wish I punched her, I wish I pushed her off the stage.” The Daily Mail took that and said I punched her and made me look like I was lying. What actually happened was that she grabbed my arm, and when I pulled it away, it just kind of slapped her.

WWD: What was going through your mind when that happened?
H.M.S.: I just wanted to get off the stage. I didn’t know what had happened. My original thought was maybe I had gone out and didn’t have my accessories, or maybe my skirt was tucked in. Then I realized what was going on as I turned my head. I was like, “I need to get out of here, but professionally.” I surprised myself because if this were a year ago I would’ve sat on the floor and cried and had someone remove me from the catwalk.

WWD: What type of feedback did you receive afterward?
H.M.S.: [Peter Copping] sent me a bag, which was amazing. It said, “Thank you, we’ve never made headline news before.” And it was headline news everywhere in the world. My friends were traveling from London and I came on the massive TV at King’s Cross Station. They were like “For f–k’s sake, what have you done now, Hollie? Why did you punch naked ladies?” I was like, “She came onto my walk!” And I’m a Belieber now, because I saw this thing on E News that someone threw something at him during his concert. He’s just doing his job. Hate on him on Twitter or whatever, but don’t buy tickets to his concert and throw things at him while he’s doing his job. I respect him for the simple fact that the same thing happened to me. I was just doing my job. I do fancy him a lot now.…He’s really hot.