Lee shared her WNBA aspirations, the model saturation in her new neighborhood and nearly fainting in Dior haute couture. 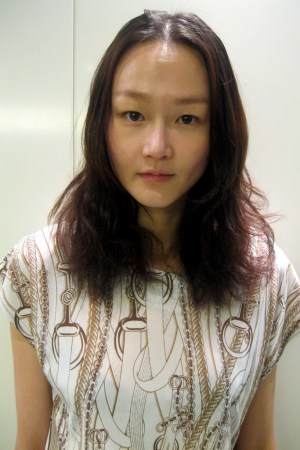 Since moving to New York earlier this summer, Hye Jung Lee has been embracing the city life — tourist style. “I’ve seen everything: Empire State Building, Coney Island, everything,” says the 5-foot-11, Major-repped model. She even stood in line for five hours to see the Alexander McQueen exhibit. Five hours, really? “Literally!” she laughs. “But it was totally worth it. I got goose bumps.” We sat down with Lee to discuss such topics as her WNBA aspirations, the model saturation in her new neighborhood and nearly fainting in Dior haute couture.

You recently turned 21. That’s a big birthday. What did you do?
I was in Korea so I had dinner with my family. And then I came here, and it was still the same day because we flew with the sun. So then I had a good dinner with my boyfriend in New York — lots of food.

What was it like growing up in Korea?
I was very focused on sports, I played basketball for 10 years. Our high school team was intense. I would train early every morning, all year. But I had to quit that when I started modeling when I was 19. If modeling doesn’t work out, I’m heading for the WNBA.

How did Major find you?
I found them actually. I just walked in with my portfolio in June and they were like, ‘Oh, we have to work with you.’

Was your book that good?
Yeah, I mean I was working in Paris before that, so a lot of my book was from shoots while I was there. I moved there two seasons ago and I was getting great jobs there. I got Dior, Louis Vuitton and some other ones. I was doing really well but Major thought I would do well here, too.

Were you sad to leave Paris?
Yeah, I liked it. It was so hard though because they don’t really speak English and I can’t speak French at all, but I just kept trying to learn. But I like New York more than Paris.

What do you like about New York?
Well I have my own place in the Lower East Side and that’s where, like, all the models are. When I’m walking down the streets, I’m thinking like, ‘She’s a model, she’s a model, he’s a model.’

What’s something that most people don’t know about modeling?
They just think modeling is just looking beautiful and that it’s easy work. Like some of my friends from Korea want to try it because I’m doing it. But they don’t understand what comes with it. You have to be in the crazy world entirely on your own. You have to be strong.

How do you keep in shape?
I do a lot of Bikram yoga and weight training. I like swimming. I like sashimi and fish more than red meat. Before fashion week, I watch what I eat. I just have more salad and exercise more. My sister works at a spa now so she makes sure my skin is perfect for show season. She hooks me up.

What tricks have you learned from her?
I have to take so many flights and she says that travel is really bad for skin, so I make sure to bring lots of masks and lotions on trips. At night, I do an exfoliating mask to get off the dead skin and an ice pad on my eyes to depuff them. And make sure you really massage in moisturizer so it doesn’t just sit on top of the skin.

Who are your favorite designers?
I like Alexander Wang and Phillip Lim, and I love Dior.

You’ve walked in two Dior couture shows. What was that like?
Two seasons ago I did the couture for Dior and, of course, I was in the most amazing dress. It was like art but it was the tightest corset. I could not breathe. I was like, ‘Oh my god, I’m actually going to pass out on the runway in Dior couture!’