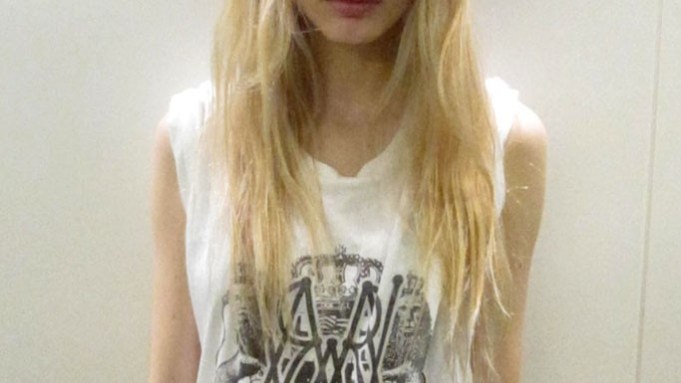 Brits may be known for their dry humor, but Idina Moncreiffe is, above all, incredibly polite. “I’m sorry, is that bad to say?” the Londoner frequently, and unnecessarily, adds into conversation. In between hitting the runway at shows like Karen Walker and Ruffian, the 20-year-old Wilhelmina model sat down with WWD to talk about the her first New York Fashion Week.

WWD: What do you think of New York Fashion Week so far?
Idina Moncreiffe: I’ve done London before, so it’s basically just the same in a different city. The people here are a little friendlier. They’re more energetic. I’ve done seven or eight shows so far, so it’s good.

WWD: Have you received any trade?
I.M.: Yeah, I’m actually going to go pick up some from Jonathan Simkhai. We’re being paid in money and trade. I left my actual jacket there after the show. I wasn’t even going to go pick up my trade because I’m really busy. But since I left my coat, it’s quite good.

WWD: How did you fare during the snowstorm?
I.M.: It didn’t really affect me that much; I just got cabs. Ruffian sent a car for me, which was nice. I always seem to be unaffected by major things. In London, when the riots were happening, I slept through them. I was in the middle of the main area, and I didn’t hear anything.

WWD: So everything’s been smooth sailing?
I.M.: Quick changes are hard. Yesterday I was supposed to have two looks at — I don’t know if I should say what show. We had these fake nails that come off really easily, and my dresser wasn’t there. I couldn’t put the dress on myself because it was complicated and I didn’t want the nails to fall off.

WWD: What happened?
I.M.: Somebody came over to help, and she was getting frantic and struggling. She just couldn’t get it. Then five people came over and they couldn’t get the dress on. In the end, I had to go out in my first outfit, with a jacket over it for the finale.