While the 21-year-old Latvian model has already shot editorials with V Magazine, Vogue Italia and Interview, being an Angel in training tops it all. 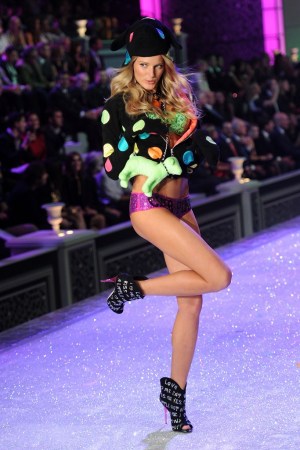 Backstage at the Victoria’s Secret Fashion Show last Wednesday, as a swarm of reporters grilled Alessandra, Karlie and Miranda on those requisite topics (Diet! Exercise! Baby Weight!), Ieva Laguna was taking it all in.

While the 21-year-old Latvian model has already shot editorials with V Magazine, Vogue Italia and Interview, being an Angel in training (only the most major girls get the Angel title) tops it all. “It was like a party back there,” she says. “Like New Year’s or something.” Postshow, we chatted with the Supreme-repped blonde about what it was like trotting down the runway in her skivvies, cameras rolling.

This was your first Victoria’s Secret Fashion Show. How were you feeling preshow?

I think I was more nervous at the casting than I was before the show. The energy backstage was so great, and everyone was so relaxed, but once you hear the music start, you get nervous all the sudden. Even the big girls who have been walking for like 10 years get nervous. But then before you know it, you’re on the runway dancing to Nicki Minaj and you forget everything that was making you anxious.

Tell me about the casting process.

It’s mostly to find the new girls, but they also see the girls that have done it before — just to see how their bodies are after a year. There were quite a lot of girls there, but less than I expected. I guess not that many got invited. You start to look at the other girls, and you feel like, This is so crazy, I’m never going to get it. These girls are gorgeous!

How many Victoria’s Secret reps were there?

John Pfeiffer did the casting, but there were like 15 Victoria’s Secret people there. There were cameras everywhere, too. I felt a little intimidated because you’re in your underwear and you’re like, I’m almost naked in front of everyone! I think my legs were shaking.

And when the show airs on TV, all of America will see you in your underwear. How do your parents feel about that?

My mom and my sister are super excited, but my dad was like, “Hmmmm.” He came around, though, and said, “You’re my little girl, so be careful up there.” But they take care of everything, lots of double-stick tape backstage. That’s why we have two fittings — to make sure everything fits perfectly.

How did you prepare for the show?

I didn’t have time to! The casting happened on Nov. 1, I think. The only girls who get to prepare are the ones who do it every year. They either want you the way you are or not at all. But all models who are hoping to get cast know the show is in November, so I know some girls prepare for the casting. But I was not expecting it at all. Even when I found out, I remember I was shooting in Germany and ate some of the chocolate-covered strawberries they had. I never forbid myself anything.

Did you get to wear the wings?

I’m a new girl, so I didn’t get to, unfortunately. I heard they were really heavy, though. Some girls came backstage like, “Oh my god! Take these off!”

What was it like meeting all of the Angels?

I was a little nervous meeting them, but they all have this beautiful warmness, but also that little bad angel part of them, too, the sexy part. That’s what Ed [Razek, chief marketing officer of Victoria’s Secret] said before the show: “Girls, you’re all special in such different ways.”

He gave you all a pep talk?

Oh, yeah. He was talking about the old girls — there were two who have done it for 10 years — and then he made a little speech for the new girls. There were 13 of us this year, I think he said. He even had all these statistics, like how many people are in the NFL, how many people do this or that to show how rare this is. It really worked, I was like, “Wow, I’m special!”