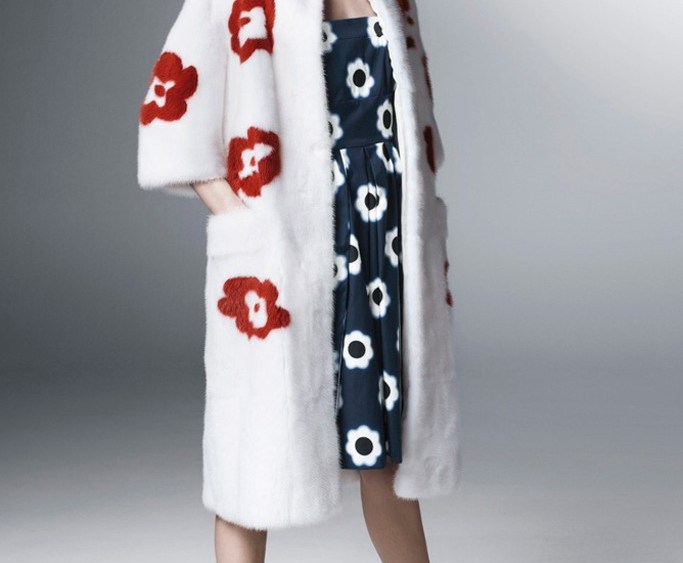 Bleaching your hair leads to true love — just ask Irene Hiemstra. “I met my boyfriend at a hairdresser in Amsterdam,” says the 20-year-old model. “We were looking at each other in the mirror, and he heard me talking. He said, ‘Oh, are you a model? I was a model, too.’ So we started talking and had a cup of coffee. It was like, ‘Boom!’” A boyfriend isn’t the only thing the DNA-repped model has snagged since she began modeling two years ago. She appeared in Prada’s recent spring and pre-fall ads, as well as countless editorials and runway stints. The Holland native stopped by WWD’s offices to talk Doutzen Kroes, ghosts and more.

WWD: What are you favorite things to do in New York?
Irene Hiemstra: I like Times Square. I don’t know why people hate it. I just walk around and go to restaurants or the cinema.

WWD: What movies have you seen recently?
I.H.: “Sinister,” “Seven Psychopaths” and “Movie 43.” “Sinister” is a horror movie, so it’s quite nasty and scary. It’s more scary, actually.

WWD: Sounds like you’re a fan of scary movies?
I.H.: Yes, but it has to be a story and not something fake like ghosts. I watch ghost movies sometimes, but I mean, the movie has to have a story. Most horror movies are just so fake.

WWD: How did you start modeling?
I.H.: I sent my pictures to my agency in Holland because I saw Doutzen Kroes become a top model, and I wanted the same.

WWD: Have you ever met Doutzen?
I.H.: Yes, once. It was at my mother agency in Holland. It was like, “Hello,” and then she was gone.

WWD: Were you completely starstruck?
I.H.: Not really. It was like, “Oh, I just saw Doutzen Kroes.” I was a little bit excited, but she’s also a person.

WWD: You just shot an editorial for Vogue China — how was that shoot?
I.H.: It was outside in New York on a beach. I was wearing just summer clothes. It was really cold — I was freezing my ass off! The call time was at 3:45 in the morning.

WWD: What is it like to see yourself in print?
I.H.: I went to Singapore once to work, and my Prada campaign was everywhere. [After I left,] my friends I made in Singapore were texting me, “Now I miss you because I see your face every day.” That was quite funny.

WWD: What was it like working on the Prada campaign?
I.H.: I was a bit nervous before shooting, because Steven Meisel is so famous. But he was easy to work with, and kind of just said how you have to stand and what you have to do with your hands and everything. It was quite easy.

WWD: What’s next?
I.H.: I have an option in Paris, I guess, because my booker just texted me that I might fly there tonight. I don’t know what the option is for, though.

WWD: How will you spend the plane ride?
I.H.: Sleeping and watching some television programs. I’m flying with KLM, so that’s the Dutch airline with Dutch soaps and everything. I listen to hardstyle music, too. A lot of people don’t really like [the genre], because it has a really hard bass and people go to these parties and take so many drugs. I never went to one of those parties though.…I just listen on my phone.