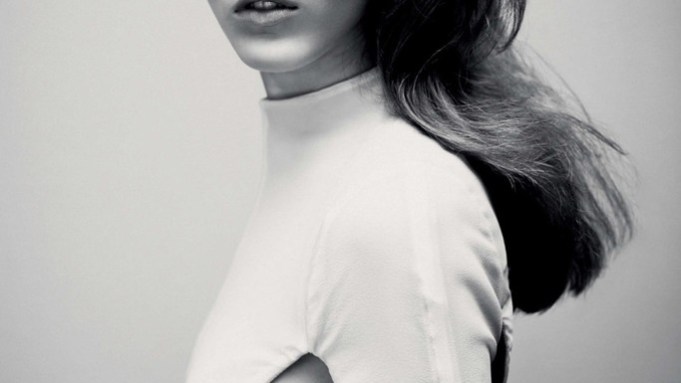 Iris Egbers does not mince words. When asked what it was like to walk in 46 shows for the recent spring collections, she responded, “Bad. And I didn’t even do London!” The 19-year-old — a native of Breda, Holland, a small town an hour north of Amsterdam — has been in demand ever since she e-mailed a few photos of herself to Supreme last year. She was quickly signed and has since found herself not only on the runways, but in a spread for W magazine (January 2011) as well as Galliano’s fall campaign. Delicate and ethereal yet with strong features, Egbers is showing some real promise.

WWD: What do you do to recover from fashion season?
Iris Egbers: Sleep like crazy. During the shows, there were times when I’d go to bed at 2 o’clock with a 5:30 a.m. call time. And my skin was the worst it’s ever been just from the lack of sleep, so I’ve been putting creams on it.

WWD: Have you taken a break from wearing makeup too?
I.E.: I shot a look book for Michael Kors this morning so I have a little bit on now. But I wanted to be a makeup artist growing up so I like it. I’m always watching to see how they do everything. Before I was a model, I didn’t know where to put the powder and what shade to use. Now when I go out, I know what I’m doing.

WWD: What advice would you offer a new girl who’s about to do her first round of shows?
I.E.: When I started, I didn’t know who anyone was. I’d go to the castings and see all the beautiful people, the models, the designers, the casting directors; you don’t know who’s important, which can make you look bad but I guess that’s something that comes with time. I’d say try to enjoy being busy. I’ve learned to like being busy and it makes everything a lot less stressful.

WWD: Did you have a favorite show?
I.E.: Of course it’s always exciting to do the big shows. In New York, it was Calvin Klein and then in Milan I did Gucci for the first time. And in Paris, Chanel is always my favorite. You always love the end of the Paris shows because you know you get to go home soon.

WWD: Did you go back to Holland after the shows?
I.E.: Yeah, I always go home after fashion week. I have a boyfriend in Holland so I always want to come back. He goes with me to Milan for the shows but I’m so busy it’s not like we can do much together. But the most annoying thing is when you’re finally home with your family and you get called saying, you have to go to Paris for this job. It’s hard not being able to plan anything, even like a week ahead of time.

WWD: What’s the best part of modeling?
I.E.: It’s all just very exciting. I remember when I landed in Paris for couture I was like, “Oh my God.” All the clothes are so beautiful, they look like costumes. I felt like I was playing dress up.