Despite her model makings — towering height, ample pout and piercing gaze — the leggy 19-year-old is a full-fledged country gal. 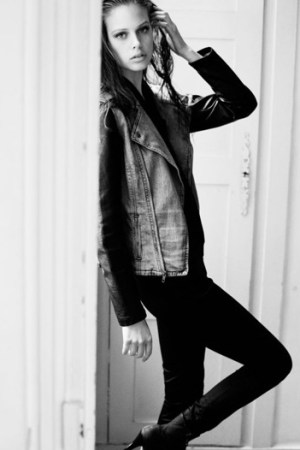 Despite her model makings — towering height, ample pout and piercing gaze — Jessica Clarke is a full-fledged country gal. “Our farm was pretty small,” she says. “But there were always cows and sheep in our backyard.” Since leaving the bucolic New Zealand countryside last year, the leggy 19-year-old has assembled quite the clientele, having walked in Lanvin, Marc by Marc Jacobs, Diane von Furstenberg, Erdem and Calvin Klein, among others. “I didn’t even tell my friends from home about my modeling until recently. I guess I’m just pretty low-key about it,” Clarke admits. We think she’s earned some bragging rights.

When did you move to New York?
I moved here at end of January, right before I did fashion week.

Was it your first time in New York?
No, my second. The first was last spring for the shows but it was a brief trip. I had to go back to New Zealand to finish school and graduate. I graduated a year early, which was an accomplishment.

Was it difficult to balance schoolwork and your modeling career?
Yeah, but my teachers were very accommodating. They’re probably the main reason why I passed at all. Most of them would work overtime with me, which I really appreciated.

Do you think you’ll attend some sort of university eventually?
Yes, that’s my goal. My dad was in the military when I was growing up so my upbringing was very structured. My life’s always been sort of scheduled. I had planned my whole life thinking that I was going to go to university and get a degree in physical therapy. Then this came along and sort of switched everything up.

The industry definitely demands a good amount of spontaneity.
Yeah, everything is very last minute. You just have to go with the flow. We moved every two or three years when I was growing up so I guess it’s similar in that sense. My upbringing definitely prepared me for modeling.

How did you get into modeling in the first place?
I was scouted at a movie theater. I have no idea what I was going to see which is funny because it wasn’t even that long ago. I had just turned 16.

Had you ever considered modeling before?
Not really. People would mention to me that I should, so it was always in the back of my mind, but I was sort of a tomboy. I grew up with boys and I played a lot of sports so I wasn’t really thinking about something glamorous like modeling.

What sports did you play?
I use to play Net ball, which I know you don’t have here. It’s basically like basketball except you can’t dribble the ball and there’s no backboard so you have to have pretty good aim. It’s the main sport in New Zealand for women. Before modeling, it was my focus. I played seven days a week.

Were you playing competitively on a high school team?

Yeah, on the high school team and then on two other recreational teams. It took up most of my time, which is why when I was approached about modeling, I was like, do I really want to do this? I already had my main passion. But I’ve always been one of those people who take opportunities as they come, so it was just kind of a leap of faith.

What has been the highlight of your modeling career so far?
Getting the D&G campaign was amazing. I love Dolce and it was kind of surreal to shoot with Mario Testino. He’s incredibly talented but also the nicest man. Also, when I got the Calvin Klein exclusive my first season. It was such a big deal.

What was your first runway season like last fall?
It was crazy. I didn’t know what to expect but thankfully I had my mom with me for New York and London fashion weeks and then my dad was with me in Milan and Paris. It was grueling but you just have to keep trudging on. I’m not a give-up type of person. I just look back and realize how naïve I was. When I was getting my Calvin Klein fitting done, Francisco Costa came up to me and was working on my look and later I asked another model, ‘Who was that?’ and she was like, ‘That’s the designer!’ So that was embarrassing but I’m much more well-versed now.

What goes through your mind while you’re on the runway?
I literally black out when I do my walk. It’s such an adrenaline rush. You come out and the lights are in your face and you feel the beat of the music. It works for me I guess. I just hope I don’t do anything weird while I’m out there.