The Polish beauty was discovered at a train station in her hometown, a quiet suburb of Warsaw, at the age of 15. 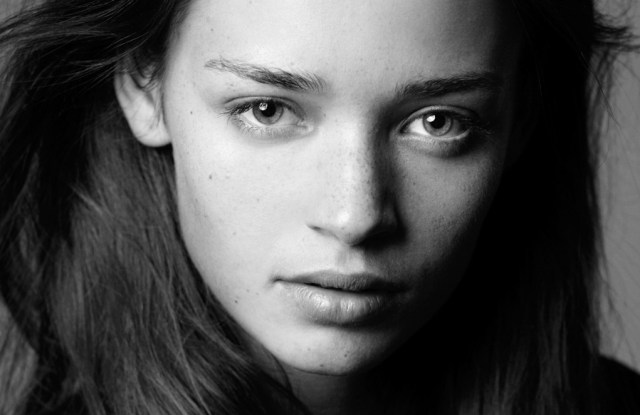 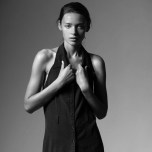 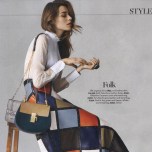 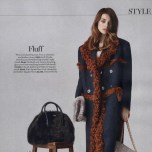 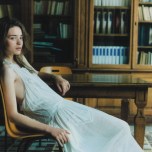 Polish beauty Karolina Gorzala was discovered at a train station in her hometown, a quiet suburb of Warsaw, at the age of 15. A self-described math and physics nerd, Gorzala was initially reluctant to start modeling — her parents felt the same — but she decided to revisit the idea after turning 19.

Her career immediately took off, and though the 21-year-old model has worked mostly in Europe, having walked dozens of runway shows there and appearing in campaigns for Desigual and Golden Goose, she’s hoping to break out Stateside, starting with the upcoming New York Fashion Week.

Newly repped by Women’s 360 division, Gorzala has shot editorials for Marie Claire’s Ukraine and U.K. editions as well as Premium Magazine. “It’s so nice because sometimes you get to take a trip, and you get to know these people,” she said. “You can express yourself a bit more.”

She trudged through blizzard Juno’s slushy leftovers and made her way to a Bryant Park cafe to discuss crushing on Kate Moss, getting into the New York groove and staying true to herself.

WWD: How did you start modeling?
Karolina Gorzala: I was scouted in a train station in my home city. I was in school at that time; I was 15. I was really into math and physics, and I was like, “No, no, no.” I never thought about modeling. When I finished middle school and passed my major exam, I said, “Okay, now I can try.” I wasn’t underage at that point; I was 19 then. I’ve been modeling for over two years.

WWD: Growing up, had you ever thought about modeling as a career?
K.G.: It happened two times that I got scouted. I was tall and skinny because my dad is. But I was never like, “Oh, yes, I could be a model.” I never thought about this. It just happened. Modeling is growing in Poland, but it’s not huge.

WWD: Has your family been supportive?
K.G.: My parents were not so happy in the beginning. They were so sure I was going to study. But now they are really happy. They see that this is good for me, with traveling. I’m not getting crazy or anything, and it’s because of them. They were always telling me that I should always be myself. They are happy and they really support me.

WWD: What was it like growing up in Poland?
K.G.: I have a sister and a brother; I’m the oldest one. When I was younger, I was a dancer, jazz style. And I was biking so much, too; I would take trips everywhere that were three days long. It was tiring but it was a nice feeling, like I’ve done something good for myself. I wanted to study nutrition. Healthy lifestyle, working out — I love that stuff. I started my studies, but after a week I went to Milan for work, so I’m going to go back to school, definitely.

WWD: How did your career initially take off?
K.G.: My first trip was to Milan…I was so lucky. I started to work from the very first day — it was so strange to me! I had only a few test shoots in my book.

WWD: Your English is great, by the way. How did you learn?
K.G.: I had English at school, of course, but comparing traveling and experience to my school lessons, school was just the basics. I couldn’t really speak when I first went to Milan, but I could survive. I’m trying to speak Italian because I spend a lot of time in Milan, but it’s still kind of hard. I’m afraid to speak because I don’t want to make a mistake. If I do something, I want to do something right. If I’m not sure how to say something, I’d prefer to say it in English.

WWD: What’s been your favorite modeling moment thus far?
K.G.: I was sent to a shoot with Urban Outfitters in Los Angeles. I loved it. It was during wintertime, so going to L.A. was so nice. That was my first time in the United States. And the photographer was Polish! We were in a big group — seven of us — and it felt like a holiday. We were doing crazy stuff, driving quads and motorcycles and everything. There were both girls and guys. It was really nice. I also did a shoot for Roberto Cavalli Class, but it’s still not out. It was with Louisa Gummer, Meryl Streep’s daughter. Meryl is my favorite actress, and I was like, “Oh my goodness!”

WWD: How are you finding New York?
K.G.: It’s so different. Europe is quiet and not so crazy; I grew up in the suburbs outside of Warsaw. But I really like New York. I really like the people. The mentality of people is really different. It’s nice when you take the subway and someone says, “Oh, I like your shoes.” That doesn’t happen in Europe. People can smile at each other here and it’s normal.

WWD: And you’re living in a model apartment. How’s that going?
K.G.: I’m in a room with four girls, but I’m used to it. I have a small corner. I like it because I don’t like being alone. I would be so bored. You cannot be friends with everybody, but no one is fighting. We all just stay in our own areas. Some of them I really like. We go out sometimes together, shopping or whatever.

WWD: Do you keep in touch with your friends at home in Poland?
K.G.: I feel like I’m really lucky because so many models say that when they start modeling, all of their friends from home are jealous. I’m lucky because my friends support me. They’ll be like, “I saw you on something!” And it’s actually Miranda Kerr. And I’m like, “It’s not me!” But I can take that comparison, I don’t mind.

WWD: Are there any models you look up to?
K.G.: I love Kate Moss. I was so into her. And even now, with some wrinkles, it looks nice. Her face is so beautiful.