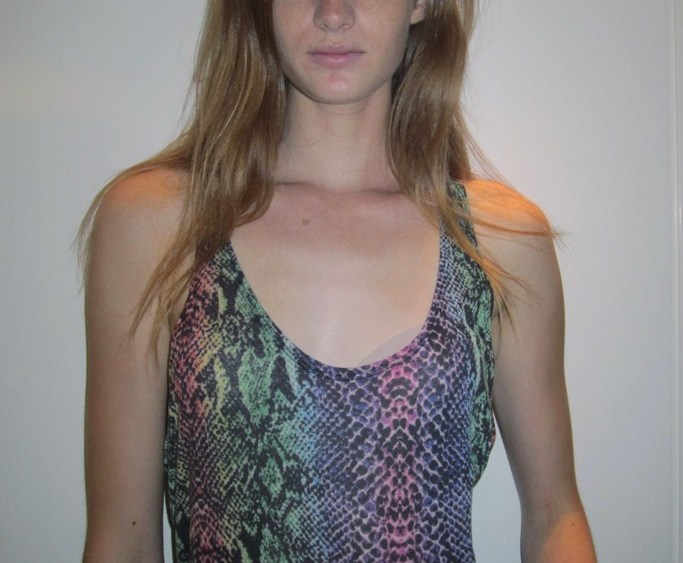 Kat Clark has only been in New York for a week, but the Canadian native is already signing autographs. “The guy at your security desk is so funny,” the 21-year-old says, sitting down with WWD after a busy day of castings. “He made me sign one of my model cards in case I become famous one day.” As Clark, who’s repped by One Management, embarks on her first full collections season, following a brief stint at Toronto Fashion Week, it may only be a matter of months before that very card pops up on eBay.

WWD: You’re about to start your first full season. Are you excited?
Kat Clark: It’s an array of emotions. It’s nervousness, excitement, happiness, scared. I’m in a model apartment, but I haven’t heard any horror stories yet. We’re all pretty supportive. They just say, “Oh, you’ll be fine! Don’t be worried, don’t get discouraged.”

WWD: You’ve been modeling in Canada since you were 13 — how did you get started at such a young age?
K.C.: It was pretty much a fluke. I was just driving to my cottage and there was a sign for a modeling competition. My parents were like, “You’re lanky and lean and skinny and tall — let’s enter you!” They were just doing it to build my confidence, but I ended up winning. The prize was a trip to New York, and I won a bunch of makeup and designer clothes. I don’t know where it went — I think I lost it or lent it out.”

WWD: Did you continue modeling throughout high school?
K.C.: Just part-time. I did Abercrombie — that was like my biggest job. It was very tame though, because it was for Abercrombie Kids. I don’t know if I ever made it onto a bag because we didn’t have the kids line in Canada until years later. Actually, my friend’s grandma said she saw me on a bag once, but she could have mistaken me for somebody else — us Abercrombie kids all look the same.

WWD: How are you preparing for the next few weeks?
K.C.: I’ve been doing a lot of hot yoga, which is very calming and relaxing. For castings, I make sure that I have all the staples in my bag: heels, my book, phone charger, hair elastic, my watch, my iPod. Also, I love Coco Rocha, so I follow her on Instagram. She’s crazy with the updates. I’m totally into Instagram — I’ll definitely be Instagramming backstage at the shows.