Katelin “Keke” Lindgard has fronted campaigns for D&G and DKNY and walked the runway at Dior. Now, her little sister, Lilli, is following in her stilettos. 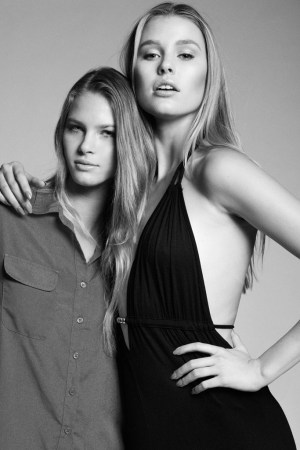 Katelin “Keke” Lindgard has fronted campaigns for D&G and DKNY, walked the runway at Dior and Lanvin and covered French Elle. Now, her little sister, Lilli, is following in her stilettos.

“[My agency] always wanted Lilli,” says Keke of her 15-year-old sister. “But I was like, ‘No, she’s too young!’” Lilli is quick to point out that “Katelin started modeling when she was 15.”

While the Lindgard sisters, natives of Hawaii, may share the same all-American good looks, cutesy first names and fondness for teasing each other, make no mistake — there is no sibling rivalry here.

During Lilli’s recent trip to New York, the teens, both repped by Wilhelmina, stopped by WWD to talk modeling and more.

WWD: Keke, you’ve been modeling for more than three years now. How did you start?
Keke Lindgard: Roman Young, one of the agents at Wilhelmina, is from Hawaii. He saw me in town and said, “You should come to New York.” My family does a snowboarding trip to Utah every year, so we flew to New York for a few days. They said, “You should do fashion week,” so I did fashion week.

WWD: What was your first show?
K.L.: Rag & Bone. I didn’t know that it was a huge show. I was really overwhelmed because I had never done anything like that before. It was fun, but it was very different. Then I did Prada, Miu Miu, Louis Vuitton, Hermès, Céline. A lot of the good ones.

WWD: Did you know those were a big deal?
K.L.: I had no clue what fashion was. I wore baggy jeans and a purple furry shirt into the office, and my agent was like, “We’ll work on that.” But it was exciting. I love the feeling of walking down the runway. It’s so glamorous.

WWD: What were some of the jobs you started booking after your runway debut?
K.L.: I started doing some campaigns. I did Gucci eyewear, Les Copains, Ralph Lauren, DKNY. I shot Numéro China recently with Ellen von Unwerth and that was super fun.

WWD: And what did you think of all of this, Lilli?
L.L.: I thought it was crazy. I went to one of the shows, and I was like, “Who wears these clothes out in public?” I think it was Prada. They had these huge blonde afros.
K.L.: That was Louis Vuitton.
L.L.: But, like, here’s me in overalls, chillin’ in the corner.

WWD: When did you decide that you also wanted to be a model?
L.L.: At first I was like, “This looks like hard work,” but then I saw it was fun and thought I might as well try it out.
K.L.: I don’t want her to, but I can’t stop it. I didn’t get to finish high school [in Hawaii], so I’m making her.
L.L.: You’re not making me — I want to.

WWD: What is the biggest difference between the two of you?
L.L.: I’m more of a tomboy.
K.L.: But I’m not prissy. She’s more sassy than I am. She’ll confront someone if something is bugging her.

WWD: Is that a good or bad quality in the industry?
K.L.: I think it’s definitely a plus. When I was younger, I didn’t say no to anything. I don’t feel like I got taken advantage of, but I just didn’t know how to say no.

WWD: What have you two been doing during Lilli’s visit?
L.L.: Well, I got sick when I first got here.
K.L.: She got food poisoning from the plane, so that kind of sucked. But we went to Coney Island yesterday. We like cheesy stuff like that.
L.L.: And I had two castings, for Seventeen and Allure.

WWD: What is your dream modeling job?
L.L.: I would love to be a Ralph Lauren girl. That’s my dream.

WWD: You have that all-American look.
K.L.: She totes does.