The Gainesville, Fla., native had a wildly successful fall season, walking some 32 shows. 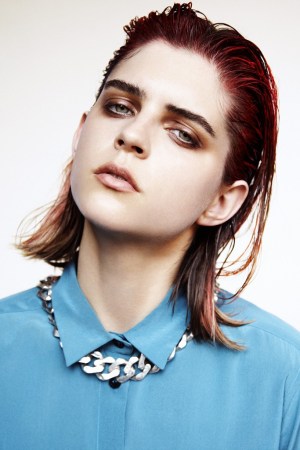 The first thing on Kel Markey’s post-collections checklist: dye eyebrows. “They were bleached for YSL, and I did three shows after that but nobody would dye them back,” says the 21-year-old, who’s repped by Supreme.

“They would just draw them in or, at Chanel, they just stuck those faux brows over them. I kept wondering why everyone was looking at me strangely when I would go to Starbucks, then I realized. Oh, yeah, I look crazy!” Occupational hazards aside, the Gainesville, Fla., native had a wildly successful fall season, walking some 32 shows, top ones including Proenza Schouler, Prada, Balenciaga and Chanel. Just back from the runway whirlwind, Markey breaks it all down for WWD — from how to sleep in full makeup to Louis Vuitton’s rumored $8 million train.

Congratulations on finishing your first full round of collections.
I had the most amazing time, but to say that I was exhausted would be such an understatement. The last few days, I didn’t sleep at all. The night before Louis Vuitton, my fitting was at 3 a.m. and the call time was 5 a.m. Before the show, we were all passed out on the floor and tables after getting our hair and makeup done. Pat [McGrath] was coming around, saying, “Don’t sleep on the side of your face, you’re going to mess up your makeup!”

Did you get any amazing trade?
I got a lot. In New York they love to pay you in trade. I’m picking up everything from Zero + Maria Cornejo and Rachel Comey today. From Europe the best thing I got was a Celine bag, which I guess technically doesn’t count as trade because it’s a gift in addition to your rate. It’s absolutely beautiful. It’s gray with these deep green and brown details. I’ve never had a nice bag in my life so I’m dying over it.

Louis Vuitton was your last show. How did it feel after that final walk?
My friend Lara [Mullen]’s look was right after mine, so after we walked off, the first thing we both said was, “Get these shoes off!” Then we started jumping up and down. After that I met my friend at Angelica’s for the best hot chocolate in the entire world, because everybody had told me about it. It really was out-of-control amazing. And then I went to sleep.

Did you sleep the whole plane ride home?
No! I chose a seat all the way in the back because there were three open so I thought I could sprawl out. Then this French couple sat next to me and they were so PDA. It was disgusting. They were full-on making out with no sense of personal space. I was audibly sighing. At one point I thought about breaking down crying and saying, “I just broke up with my boyfriend, can you guys stop?” But I chickened out and just watched TV instead.

Was it so nice to see your family?
I’m from Florida but I live in New York, so I haven’t seen them yet. I’m going to New Orleans tomorrow to see my mom and my sister. We’re all going for a vacation. We’re going to do the whole thing — Café du Monde, the French Quarter, you know, be tourists. But I told my mom, “Don’t even think about any museums or walking tours. I’m too worn out. I’m down to eat, sleep and maybe get a massage.”

What does your family think of your modeling?
They’re very proud of me because I really did it on my own. When I first decided to try it, I was going to university in Florida, in the town where I lived. I was just like, I can’t do this anymore so I just withdrew and used all my savings from my high school job to move to New York. I wasn’t scouted like most girls. I took the initiative and it ended up working out. They’re really proud of me, and of how I got here but, to be honest, they don’t know a lot about what I do. Once I called my mom and said, “Mom, I just did Balenciaga!” and she said, “Cool, what’s that?” My parents are amazing, though. I’ve met so many girls that have, like, stage moms. That’s what we have bookers for.

What was your high school job?
I worked at a Honey Baked Ham. All they sell is ham. Then I got a job assisting wedding photographers. Bridezillas, they were hilarious.

So what was the highlight of your runway season?
It’s hard to choose! Walking for Proenza was such an amazing moment. When the music started and I was about to walk out, that was the first time I was like, “Holy s–t, this is incredible.” Also, the Louis Vuitton show blew me away. I heard the train cost $8 million [Vuitton declined to comment on the cost]. And it was so beautiful inside. You think they’d do bare-bones since only us models would see it, but it was really nice upholstery and luggage racks and all this beautiful wood paneling. I guess when Marc does things, he does them perfectly.