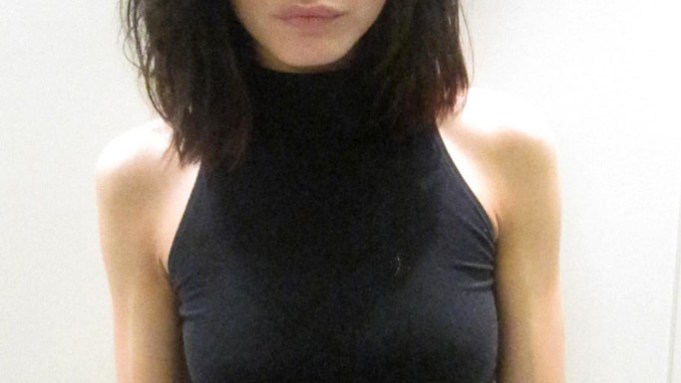 While most 21-year-olds hit the books, Kelsey Rogers hit the runways of some of New York’s biggest shows (including Oscar de la Renta, Thom Browne and Costello Tagliapietra). Still, the Nebraska native has her mind set on her education in the future. “I want to study nutritional science and get my personal training certificate and incorporate all of the things that I love into one thing,” she says. In the meantime, however, the Marilyn-repped model is perfectly happy with her current gig. WWD sat down with Rogers to get the inside scoop on her New York Fashion Week experience.

WWD: Are you heading to Europe?
Kelsey Rogers: No, I got out of going. It’s just like…I’m already exhausted after one week, and I would rather just stay here and make money, to be honest. It’s just so exhausting, running around to so many castings. One week is enough for me. I’ve done the multiple cities a few times, and so I’m like, “Eh, been there, done that.”

WWD: How was this round of NYFW?
K.R.: It was really good. I can’t complain. I stayed busy, and I like staying busy. I love going around, seeing new clients and doing the shows. But like I said, I’m glad it’s over.

WWD: Did you have a lot of late nights?
K.R.: One day I was up at, like, 5 a.m. for a show at Lincoln Center. From there I did a shoot, then I went and did another show, then I was doing looks until 11:30 p.m. And then [my agency] was like, “Oh yeah, now you have to go to a fitting!” So I was home at 1 a.m. and had another early morning the next day. Starbucks made a lot of money off of me.

WWD: What was your favorite show that you walked in?
K.R.: I really loved the Oscar de la Renta show. The collection is so beautiful, and John Galliano made it so modern. And the girls, of course, were all amazing and beautiful, so that was really fun. I also enjoyed the Thom Browne show because of the way they had it set up; there were trees and male models laying on the beds, and crazy hair and makeup.

WWD: What was the Oscar de la Renta show like with John Galliano?
K.R.: I’ve done the Oscar show before, but the vibe was so much different. John has so much energy. You know when someone’s mood can really change everyone else’s mood? John seemed so laid back, and even though everyone else was so stressed out about getting all these fittings done for more than 40 girls the day before the show, he’s, like, calm and very cool and really very sweet.

WWD: Did you see how they collaborated?
K.R.: Yeah. They both gave their opinion, and then they worked very well together. If John suggested one thing and if Oscar didn’t like it, then John was like, “OK, we don’t have to do it.” They each had their opinion about each look, and they just kind of compromised or agreed. It was cool to see.

WWD: When you went in for the Thom Browne casting, did they say, “The show is going to be a little different”?
K.R.: No, I had no idea. When I showed up to the show, some of the girls had already had their hair and makeup done. I see them teasing the hair, and there are crowns and red lips, and I’m like, “Oh, my god, I was not expecting this!” But I think that’s what makes it exciting, you know? To show up and not know what you’re going to look like in the next hour.

WWD: Did they give you any instructions about how to walk?
K.R.: They said to do a very slow walk and to look very dreamy — not sad, dreamy. During the rehearsal, the boys were laying on the beds, texting. We didn’t really know how exactly it was going to be set up. I walked out for the show and saw them tied up…I did not know they were going to be tied up to the beds!

WWD: Besides Thom Browne, did you have any other crazy hair and makeup?
K.R.: I think I spent maybe an hour and a half in just hair at Nanette Lepore. It was a very tight ponytail, and because my hair is a little shorter, it was a little more difficult. By the end of it I thought my eyeballs were going to pop out of my head! I’m like, “Oh, my god, I feel like I have a facelift!”