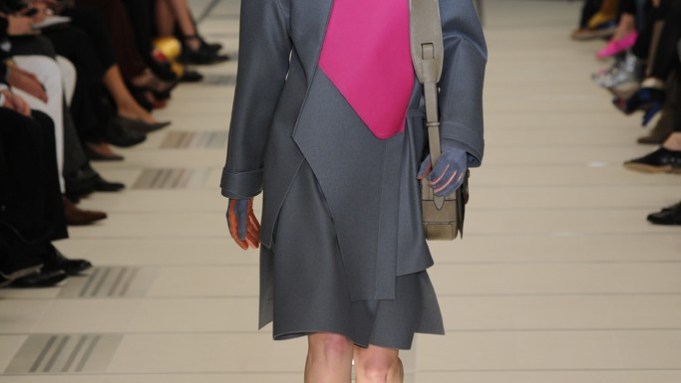 Unlike most newcomers, Kristine Drinke got a bit of a head start, a “cheesy” one at that. “I went to modeling school,” says the 22-year-old from Latvia. “They taught us acting and then you do some aerobics and you learn, like, catalogue modeling so I left.” Which proved to be a wise choice. After bopping around Europe (Milan, then Paris, then London), Drinke was discovered by Elite London, her mother agency. Two years later, this past October, she came Stateside with Trump New York — a move that landed her a fall exclusive with Balenciaga. Here’s how it all went down.

You went to modeling school at age 15. Were you always into fashion growing up?

Not really. I could wear the same T-shirt in different colors for the rest of my life — black, gray and white. I like clothes but I wouldn’t go crazy at H&M standing in line all night for the new designer collection like some girls do. I wanted to go to the modeling school because of travel. My friend was going there and told me she was going to Greece for work so I was like, “Hey, I want to go!”

Tell us about the Balenciaga exclusive.

I was put on an exclusive option so I couldn’t do any other shows before Balenciaga. I found out when I was at home in Latvia for Christmas and my agency called and was like, “Balenciaga is interested in you.” So I went to Paris after New Year’s because they wanted to see me in person.

Who did you meet with?

It was Nicholas [Guesquière, creative director] and Ashley [Brokaw, casting director]. My booker said, “Show your personality.” But when I got there they changed everybody into a black dress and pulled our hair back. So I just tried to smile and be myself. But they just took my picture quickly and had me walk once. I don’t even think I had time to say my name. I couldn’t see their expressions and they said, “OK, thank you, we’ll contact you.” So I was not getting my hopes up.

I went home to Latvia and a few weeks later, my booker called me and said, “The Balenciaga people are coming to New York to do another casting and they want to see you again.” So I flew back. They tried like four outfits on me but I still wasn’t sure. Then on the Sunday before the show, my agent said, “You got looks with Balenciaga but looks doesn’t mean you got the show.” So I went to Paris and I still didn’t know, even the day before the show. At 10 p.m. that night, my agency finally sent me my schedule for the next day and it said a 5 a.m. call time so I was like, “OK, I’m in!”

And after the show?
I treated myself to a trip to Puerto Rico. I went for a week by myself. It felt good since I had earned it. I just enjoyed the quiet for once.