In the five days since the season started, the 17-year-old Brit has walked nine shows including Marc Jacobs, Rag & Bone and Alexander Wang. 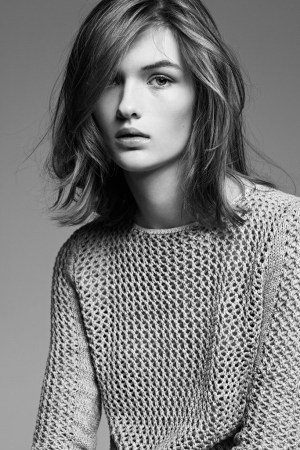 Lara Mullen has had one hell of a week, a New York Fashion Week, that is. In the five days since the season started, the 17-year-old Brit has walked nine shows including Marc Jacobs, Richard Chai, Rag & Bone, Prabal Gurung and Alexander Wang. “I loved the netting over the mouth at Alex Wang,” said Mullen, a new addition to UK-based Premier Model Management. “It definitely helped me get into character and become the Wang woman — tough, serious and a fast walker!” We chatted with her via phone in between castings and shows.

How was it walking in the Marc Jacobs show?
Those Mad Hatter hats were really warm. Luckily I could see where I was going just fine. It was such a huge and incredibly slick production. So amazing!

And then Rodarte the next day. What was that like?
Scary! I was terrified of tripping on my dress! I wore this beautiful long, green hand-printed dress. The finale was particularly exciting as we all had to take our positions in the dark — very dramatic!

This is your second season. Has anything surprised you?
Well, the clothes are a lot heavier, which I was prepared for, but the footwear has been a great deal lower, which has been a happy surprise.

Have you been getting sleep?
I’m exhausted but I have to say I’ve been getting to bed at reasonable hours. Last night it was half past 11, quite early considering it’s fashion week. Although, I did have to get up at 5 a.m. the other day for a 6:45 a.m. call time for BCBG, so that was a long day.

Spring 2012 was your first show season. What do you most remember?
I just started modeling four weeks before so it was a shock, really. One minute I was at school studying math and the next I was talking to Gisele backstage at the Givenchy show in Paris — it doesn’t get more surreal than that! Oh, and the clothes! I got to wear the most insane things. And Alexander Wang’s shoes are always so cool but I will always think of them as uncomfortable because his show was the first I ever walked in and it was the first time I wore heels!

What’s next for you?
I’m going to London. I do really look forward to it because it’s my home. Go London! Brit power!

And what will you do after fashion week to treat yourself?
I may take a day or two to sleep but then I have to go back to school and catch up.