With her high cheekbones and catlike stare, the 19-year-old Swede strikes a juxtaposition of soft girlishness and feline feral. 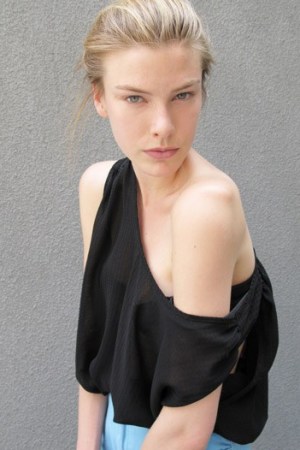 Some girls just can’t believe their luck. “When I see myself in pictures I’m like, ‘Do I really look like that?’” Madelene de la Motte says incredulously. With her high cheekbones and catlike stare, the 19-year-old Swede strikes a juxtaposition of soft girlishness and feline feral. It’s no wonder she walked 14 shows in February and recently landed resort gigs for Calvin Klein, Diane von Furstenberg, Celine, Rag & Bone and Reed Krakoff. She was just signed in January (by Marilyn), but de la Motte talks like an old pro. “If you feel insecure in front of the camera, it will show,” she says. “You just have to remember that every model’s been there, doing their first shoot or their first show. Everyone’s been a new face.”

Have you officially moved to New York?
Right now I’m based in Sweden but it’s not like I’m there a lot. I’m probably going to move here in the autumn. I’m looking for an apartment now.

Will you live on your own?
No, I get bored even being 10 minutes by myself. Merethe [Hopland], one of my modeling friends — we’re going to try and find a place together. We love being downtown so like the East and West Village. It’s more relaxed down there, younger.

If you had to describe the modeling industry in one word, what would it be?
Bubble. I love fashion but the industry is in a bubble. It’s all about knowing the people in the bubble and the people on the outside don’t know them at all. If I mention a name from work in Sweden, they’re like, “Who?” and I’m like, “How do you not know who that is?” To someone in the fashion industry, they’re like “Of course, that’s this casting director” or whoever. You don’t even have to say their last name.

You said you love fashion. Who are you wearing now?
This is Rag & Bone, the jacket and the dress.

You were in their resort show, right?
Yeah, I love their look. Even their casual things still look special and have something extra. It’s all about that in my clothes. I want people to look a second time and be like, “Oh my God, I really want that black shirt.”

What was your first major splurge?
It must have been my Mulberry bag. It was kind of like a treat for myself since I had been working all summer. I bought it in euros. I haven’t even calculated it in Swedish kronas because I don’t even want to know. Most girls splurge on shoes but I’m not big on shoes.

You’ve had to wear some crazy ones on the runway. What were the worst that you’ve had to walk in?
A lot of shoes that are really tall have platforms, so then they’re quite easy to walk in. But at the Costume National [fall] show in Paris, they didn’t have a platform so that was kind of tricky. And they were like, ‘Go fast so you don’t think it’s a high heel.’ That didn’t work very well. I tripped twice but I managed.

I’m going to ask you about the last few things you did. What’s the last thing you cooked?
My banana porridge this morning.

What was the last thing you wore for a night on the town with friends?
Converse [sneakers] with a black dress from Topshop. Then I topped it off with accessories.

Last restaurant you ate in?
I went to the Mexican restaurant, Ah! Chihuahua, on 53rd and First last night. I love their fajitas — lots of cheese.

Last movie you saw?
I saw “Bridesmaids” two days ago. It’s so, so funny.

Last beauty product you put on?
YSL concealer. I’m married to my concealer.

Have you learned any beauty tips along the way through modeling?
My new thing is highlighting. You’re supposed to put it on your nose and some here on your cheekbones. I also just learned that you’re supposed to put on some foundation before you put on concealer. I think that’s right.

And you just shot with Mario Testino, right?
Yeah, for British Vogue. It was so interesting because there are so many people on the set. Like, thousands of assistants. I’ve never been on a shoot that was so big. It was like a movie set. I felt like a star.