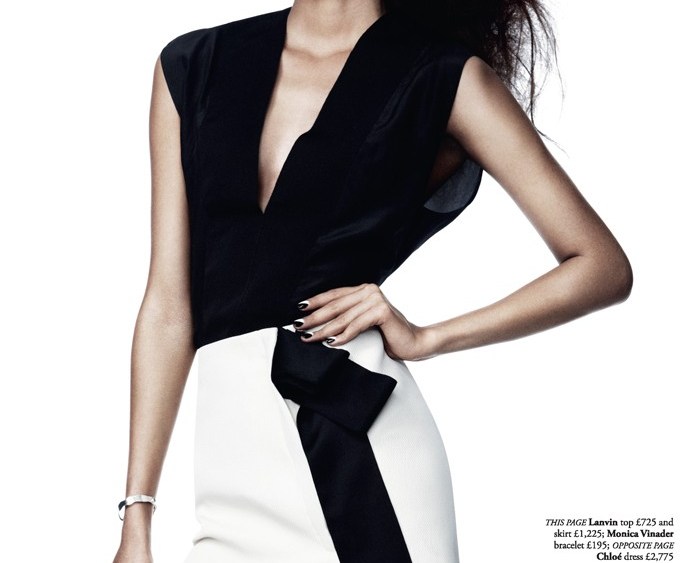 Just two years into her modeling career, 19-year-old Malaika Firth is being hailed as “the new Naomi” — and for good reason. The Brit’s starring role in Prada’s fall campaign — alongside Christy Turlington and Freja Beha, among others — marks the first black model to be featured in the house’s ads since Miss Campbell in 1994.

While Firth, who was born in Kenya, describes the honor as “amazing,” she might prefer a different claim to fame. The next Julia Child, perhaps?

“I love cooking,” the Premier-repped model says. “[My speciality is] rice and curry.”

Back in London for a stretch of editorial castings, Firth called WWD to chat Prada and more.

WWD: What made you pursue modeling?
Malaika Firth: Basically, I watched the program “The Model Agency” on Channel 4. And I’m very fond of Premier models and I really wanted to join the agency, so my mom called up. I was 17.

WWD: Has your mom always been supportive?
M.F.: Yes. My mom took me to all my castings. She would still take me to them now, but I told her, “It’s enough, mom.”

WWD: Is it hard to be away from your family?
M.F.: It is, because with such a strong family, we’re really bonded together. For me to go away the first time to New York by myself, I was so nervous. After a couple of weeks, I found it easier.

WWD: Where were you when you first saw your Prada campaign?
M.F.: I was in IKEA. I was buying a sofa and I heard my phone ring. My agency was like, “The pictures are out.” I was so excited. I screamed in IKEA. I couldn’t help it.

WWD: You are the first black model to be featured in a Prada campaign since Naomi Campbell in 1994. How does that feel?
M.F.: I’m proud that I’m the second black model, but also, I’m mixed. I’m biracial. I find it really good that I’m not white and I’m not black. It’s amazing. Naomi Campbell is so big, so for me to be compared with her is wow.

WWD: Who do you look toward as role models within the industry?
M.F.: I look up to Jourdan Dunn and Joan Smalls. I met Jourdan in Oxford Circus two years ago when I just started modeling. She was supersweet. I thought she was going to be a diva, but she was so friendly.

WWD: Were you nervous to work with so many male models?
M.F.: Actually, I wasn’t. All the guys were very nice. I found it quite exciting and less stressful because you’re not wearing heels and the main focus is for the guys, not the girls.

WWD: How does it feel to be booking these major jobs so early in your career?
M.F.: It didn’t just happen like that. I’ve worked so hard for myself. I’ve done a lot of editorial shoots to get this Prada job and stuff. I feel like I’ve worked so hard to be where I am right now.