The Trump-repped, Copenhagen native is dead-set on making a name for herself despite her 5-feet, 8-and-a-half-inches. 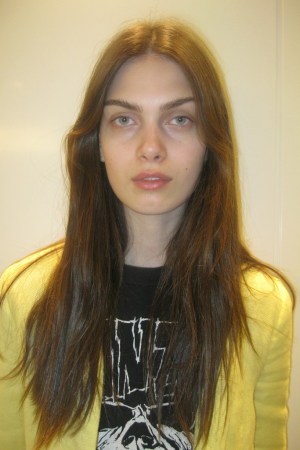 Maria Palm is proof that even a petite girl can make it in this biz. Like those models of shorter stature before her (Kate Moss, Charlotte Free, Bambi Northwood-Blyth), Palm is dead-set on making a name for herself despite her 5-feet, 8-and-a-half-inches. “Since I’m smaller, going to fashion week castings is more about getting my face out there and meeting all the right people rather than booking shows,” says the Trump-repped 18-year-old. It seems to be working — the striking Copenhagen native landed the spring 2012 campaigns for both Diesel and Topshop, and she just shot an upcoming editorial with big name photographer Emma Summerton for a high-end mag that she can’t name until it hits stands.

What were you like as a kid?
I was constantly changing. You know, you have your phases. I had my kind of rocker, goth period, listening to Nirvana and being moody. I cut my hair really short and dyed it green, then platinum blonde. That was in like sixth and seventh grade. I looked like a little punk boy. Then I went through my artsy phase. I played piano and was really into painting and drawing.

So was modeling ever on your radar?
It was all sort of an accident. My friend wanted to go to this modeling competition, the Elite Model Look contest, so I went with her. I was there so I thought, ‘why not?’ I sort of just did it for fun.

Did you end up winning?
Sadly, no. They have these smaller competitions and then the winners of those go to the big one in Shanghai. I didn’t make it that far. But it didn’t really matter about getting to the finals as long as you still get signed. And I did, with my mother agency Elite Copenhagen. It was all just a happy coincidence because I was planning to go just for fun. I was really just there for support.

Did she get signed too?
Yeah, we both got signed but she’s in school so she can’t do it full time yet like me.

When did you go full time?
I just started almost a year ago. As soon as I was done with school, I went to Paris. I went all around Europe, London, Milan, Paris and now I’m here in the U.S. I came here for the first time in January.

What do you love most about modeling?
It sounds so trite, but the travel. I love going to places that most people never get to see. I love the feeling of waking up and for a few minutes not remembering what city I’m in. It’s exciting.

What’s been your favorite destination?
Probably Marrakesh. It was just so distinctly different from anywhere else. You see the taxis, with a bunch of people sitting on top of each others’ laps, and they’re driving alongside donkeys walking down the street with people riding them like they’re a bicycle or something. It’s insane.